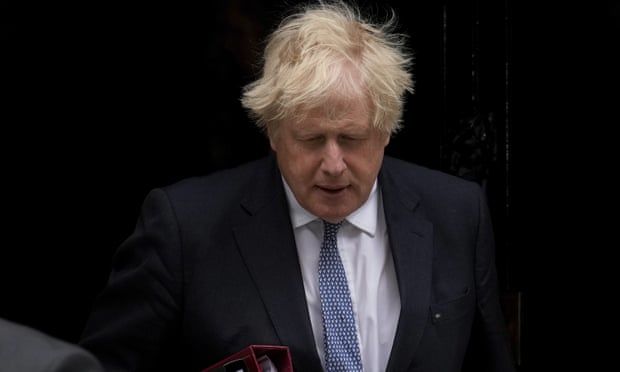 The vote today will show the British people how many criminals backing up the criminal-government, and how many honest parliament members will vote against the criminals that holding the leadership despite their serial wrongdoings and failures.

In just 12 hours on Sunday, the mood appeared to shift dramatically in Boris Johnson’s camp. Days earlier, cabinet ministers had been confidently predicting no vote would be held – even briefing names of some of the prime minister’s staunchest critics who they hoped to win round.

Even on the Sunday morning shows, the transport secretary, Grant Shapps, who was Johnson’s “numbers man” running sophisticated spreadsheets to track backers for his leadership campaign, said he did not expect that vote.

But later that evening, the business minister, Paul Scully, all but conceded it would happen. With 54 letters of no confidence required to trigger a vote, the sheer weight of numbers was against the prime minister. In total, 50 MPs have been publicly critical of Johnson’s position without any caveat of saying he should nevertheless stay in post.

A further 36 had not made public statements since Sue Gray’s report into the Partygate scandal, but had previously suggested to constituents they would make their decision based on her findings.

Graham Brady, the head of the 1922 Committee, is not a man who calls the fire brigade at the first sign of smoke. When he oversaw the vote of no confidence in Theresa May, he said the threshold of letters to trigger it was seeing “an element of traffic in both directions” – people were putting letters in and also taking them out.

But Brady called May – and one can thus assume the same applied to Johnson – when he judged the threshold had clearly been exceeded, despite some being withdrawn.

Even if Johnson wins the confidence of MPs on Monday evening, as he expects to, the plummet from grace has been extraordinary. It is just three and a half years since the Conservatives forced their last vote of no confidence on their leader.

Since then Johnson won the Tory leadership with the landslide backing of the parliamentary party and of party members.

He then secured a landslide election victory – an 80-seat majority after an era of deeply unpredictable coalitions and tiny majorities. He took the UK out of the EU – the culmination of a project that had been the most fevered wish of many of his supporters.

Yet perhaps only this prime minister could have squandered all that so swiftly – Partygate encapsulated a sense of “one rule for them” that has been the constant aura through Johnson’s political career. He was cavalier with the truth. He wavered on difficult decision making. His No 10 operation was chaotic. His delivery of key pledges was thin.

Now his critics range from the more predictable ousted ex-ministers to staunch Brexiters who plotted the removal of his predecessor, from 2019 red wallers to select committee chairs and lockdown sceptics.

The odds are still on for the prime minister to convince the majority of MPs to keep him. His best chance is to get into the campaign mode where he is most comfortable and convince MPs he is a winner. But the rebels are getting more organised. Last night a briefing document circulated among MPs setting out the case for why Johnson is now an electoral liability.

The most damning line was that the booing of Johnson during the Queen’s platinum jubilee celebrations “tells us nothing the data does not” and that no social group polled says they trust the prime minister.

Another point says the “entire purpose of the government now appears to be the sustenance of Boris Johnson as prime minister” – pointing to his personal negative ratings and saying that “defending the indefensible” is not to protect the party but one man.

That will be the question in the back of most MPs’ minds as they cast their votes tonight.