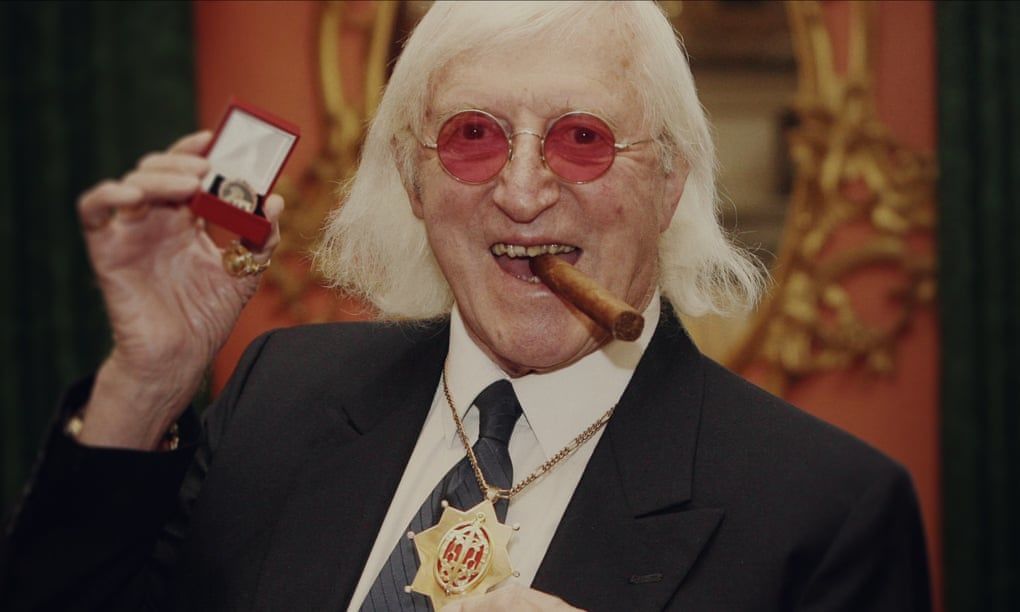 A decade after his fathomless crimes came to light, this documentary brings home the misery Savile spread, unchecked – and reveals how he ‘groomed the nation’
If this guy was walking down the street, you wouldn’t want to talk to him,” says Selina Scott, watching footage of herself in her 80s-presenting heyday interviewing Jimmy Savile in his “flirtatious” mode. Young Selina masks her discomfort with a professional charm and veneer of bonhomie (“The camera lies,” she notes now) as Savile skates ever closer to the boundary between what was then acceptable banter from a celebrity in the company of a hot blonde – an already generously allotted area – and outright creepiness. He is, as the two-part Netflix documentary Jimmy Savile: A British Horror Story shows time and again, the very definition of a predator hiding in plain sight.

A decade on from his death and the investigation – which alas succeeded rather than preceded the passing – into what turned out to be crimes extending over half a century and more than 50 children’s homes, schools and hospitals around Britain, the story is no less shocking or confounding. Somehow, the meticulous piecing together of the Savile phenomenon by the documentary makers only makes it more so.

The nearly three-hour running time is a measured, relentless march of contemporary footage, present-day interviews with people who worked with or knew him, the investigative journalists who eventually unearthed the evidence behind the rumours – the years and years of rumours – and one of his victims – from the years and years of victims. It moves chronologically through his career, from the early days as a DJ through to the jewel in the BBC’s crown as Top of the Pops and Jim’ll Fix It presenter, and on to an enjoyable non-retirement as a national treasure in perennial demand for TV guest appearances. All of it bolstered, of course, by his constant work raising millions for charity – most famously for Stoke Mandeville hospital and other such institutions. The latter gave him an entree into the establishment, and friendships with everyone from then prime minister Margaret Thatcher, who admired his can-do spirit, to Prince Charles, who saw him as a conduit to the working man and spent years in correspondence with him seeking advice on public relations and the best way to use royalty’s influence for the good of under-acknowledged services. It, effectively, made him invincible.

Rumours of his true predilections abounded, but there was never any evidence. Journalist Meirion Jones eventually found victims willing to testify, despite their enduring vulnerability, but his Newsnight investigation into the by-then late Savile’s rape and abuse of countless children and adults was infamously pulled at the last minute, apparently to save the BBC embarrassment.

Savile himself seemed almost unable to believe his luck, and couldn’t resist pushing it. Or maybe it was the Catholic in him that couldn’t resist the urge towards confession. He would frequently “joke” about the dark forces secretly animating him, or the sins he hoped his fundraising would cancel out at the pearly gates, or how “my case is coming up next Thursday!” How Parkinson, Bragg, Bough and countless other interviewers laughed. In one extraordinary moment, a reporter spending a week with him as he runs the length of the country for charity asks if the running is a way of punishing himself. “No,” replies Savile, devoid of his usual tics and catchphrases. “The only time you need to punish yourself is when you’re with young ladies … because you’re such a villain and you’re not kind to them and you squeeze them and make them go ‘Ouch!’ and things like that.” It dumbfounds the viewer 30-odd years on as thoroughly as it does his companion.

A British Horror Story passes relatively lightly over the possible causes of Savile’s depravity. In a way that is fair enough – it would always be speculative – but it doesn’t dwell on his profoundly close and strange relationship with his mother (though it shows Andrew Neil asking him why he sat with her body for five days after she died), which even if not explanatory is surely revealing in some measure.

It also omits any mention of the claims about his necrophilia: perhaps for legal reasons, perhaps to make the programme more palatable for Netflix’s international audiences, perhaps so as not to strain viewers’ credulity about our own credulity towards the man who, in the lead police investigator’s words, “groomed a nation”.

It does, however, give space, dignity and the last word to one of his victims: Sam Brown, whom he repeatedly abused at Stoke Mandeville hospital. She provides a welter of horrifying detail that the makers carefully embed without sensationalism but which bring home the absolute and fathomless human misery he spread, unchecked.

Savile believed in hell and spoke often – without naming his debits – of his hope that his charity work would balance the books. Never. Let us hope hell exists.
Add Comment