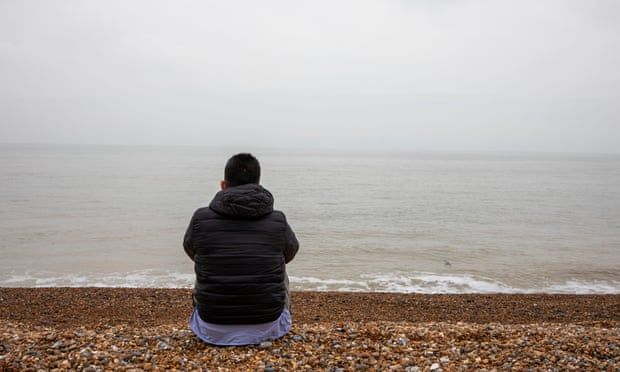 ‘I come, or I die’: fatalistic refugees say Channel crossing their only option

In the early hours of Thursday morning, a group of newly arrived refugees huddled together on the coast of Dover. The smugglers had not halted their trade in moving people across the Channel and, just hours after 27 people died on the perilous journey, they were back at work.

There is little evidence that the latest loss of life will deter others from making the dangerous journey. After the tragic drowning of the Kurdish family who tried to cross the Channel in October last year, two asylum seekers who survived told the Guardian that, despite being deeply traumatised, they continued trying to cross and not long after made it to the UK.

One of the two, Ali, said: “The journey took seven to eight hours and my legs did not stop shaking for the entire journey.”

Several asylum seekers who have crossed in recent weeks and months said they were fully aware of the dangers but felt they had no choice.

Previously, fewer refugees crossed from northern France in small boats because it was easier to hide in lorries. But the recent increase in security at lorry transit points in northern France has added to the numbers trying to get to the UK by sea.

Ali, 28, who fled Iran because he faced persecution for his Bahá’í faith and crossed the Channel six months ago, said: “I didn’t have any other way to do it while my life was in danger.”

He is a fluent English speaker and said he had read many articles in the UK media about drownings in the Channel. He knew the Kurdish family who drowned, as he had spent time in northern France with them. He said he was fearful of getting into the boat, but the alternative was being sent back to Iran.

“We are asylum seekers, not economic migrants. If it was safe for me in my country I would apply for a job-seeker visa and come to the UK that way, and I would not try this dangerous journey,” he said.

A 23-year-old seamstress from Afghanistan, who fled forced marriage before the Taliban took control, escaping through Herat into Iran and then to Turkey, said a relative paid smugglers to bring her through Europe to northern France, where she boarded a small boat to the UK. She said: “My relative paid the smugglers a lot of money to bring me through Europe and to put me into a small boat. Because they paid a lot the smugglers treated me good. I was one of the lucky ones. If you have money it is easier.”

She said she was afraid of crossing in the small boat but was also fearful of remaining in northern France. “I am glad I have survived until now. In Afghanistan I was not free. In the UK I am waiting but I am free,” she said.

Ari, from Syria, crossed the Channel not once, but twice. He was removed to another European country under the Dublin rules, where one EU country can request permission from another to send an asylum seeker back there. Since Brexit, the UK is no longer part of this scheme.

He said there was a fatalism among desperate refugees crossing the Channel. “Either I come, or I die,’ I heard this phrase every day in Calais,” he said. “When I came to Britain I felt a strange relief inside me because I knew that this journey would end either in drowning and death, or arriving in Britain. In both cases the misery would end.”

Saam, 23, fled Iran after converting to Christianity and protesting against his government. He said the smuggler he spoke to promised that he would reach the UK by car, travelling on a ferry. He was put into a car by the smugglers, but then told to get out at the beach and forced into a dinghy at gunpoint.

He said: “The smuggler said: ‘Get in or I’ll shoot you’. I thought about my mum. She is still in Iran and she is so worried for my life. I thought that for her sake, I have to get into the boat and take this risk to try to save my life. I said to myself ‘maybe I won’t arrive, but I have to try’.” 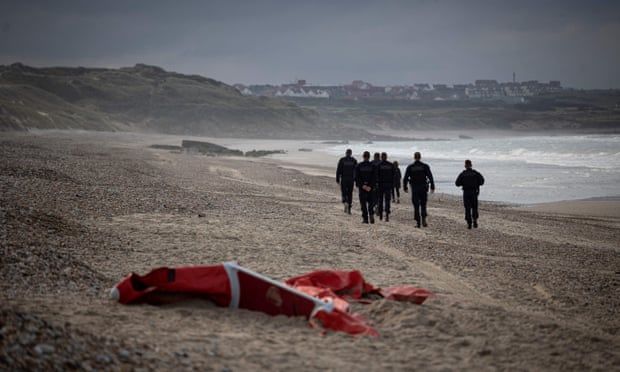 Police patrolling the beach in northern France pass by the wreckage of a inflatable boat used in an attempt to cross the Channel.

Saam arrived in the UK but is still traumatised. “I am very afraid here. I have so much stress. I have to sleep with the light on because I am frightened,” he said. “If I was safe in Iran it would be crazy to come to a different country with different culture and different laws. I am a Christian but I will be alone here at Christmas in my room. I can only talk to the walls and the spiders.”

Mohammad, 21, from Afghanistan, came to the UK in a lorry at the age of 15. He now has leave to remain in the UK and lives on the south coast, where he has seen some of the refugees arriving recently in small boats. “I understand why they are coming,” he said.

Two of his younger brothers, aged 14 and 16, arrived in the UK just weeks ago after crossing the Channel on a small boat, escaping Afghanistan before the Taliban took control. He was overjoyed they had survived, as he had not known if they were dead or alive. “I was so excited when I spoke to them and they told me they had made it to the UK,” he said. “It was a really good moment.”

They were not able to spend much time together before his brothers were moved to the north-west of England by the Home Office. “I have only been able to visit them once. I took them into the town and bought them some clothes and things they needed.”

He said the Home Office is disputing his brothers’ ages, saying the 14-year-old is 25 and the 16-year-old is 23. When he himself claimed asylum, the ages of his brothers at the time was part of his evidence.

“My country is very rich. There are many things in Afghanistan. My wish is that one day my country will be safe and free with no fighting and no killing. When that day comes I promise you, UK, I will leave from here.”

“Everybody who gets into a small boat knows it is not safe. If there is a problem, you are going to die and the end of the day will be the end of your life.”