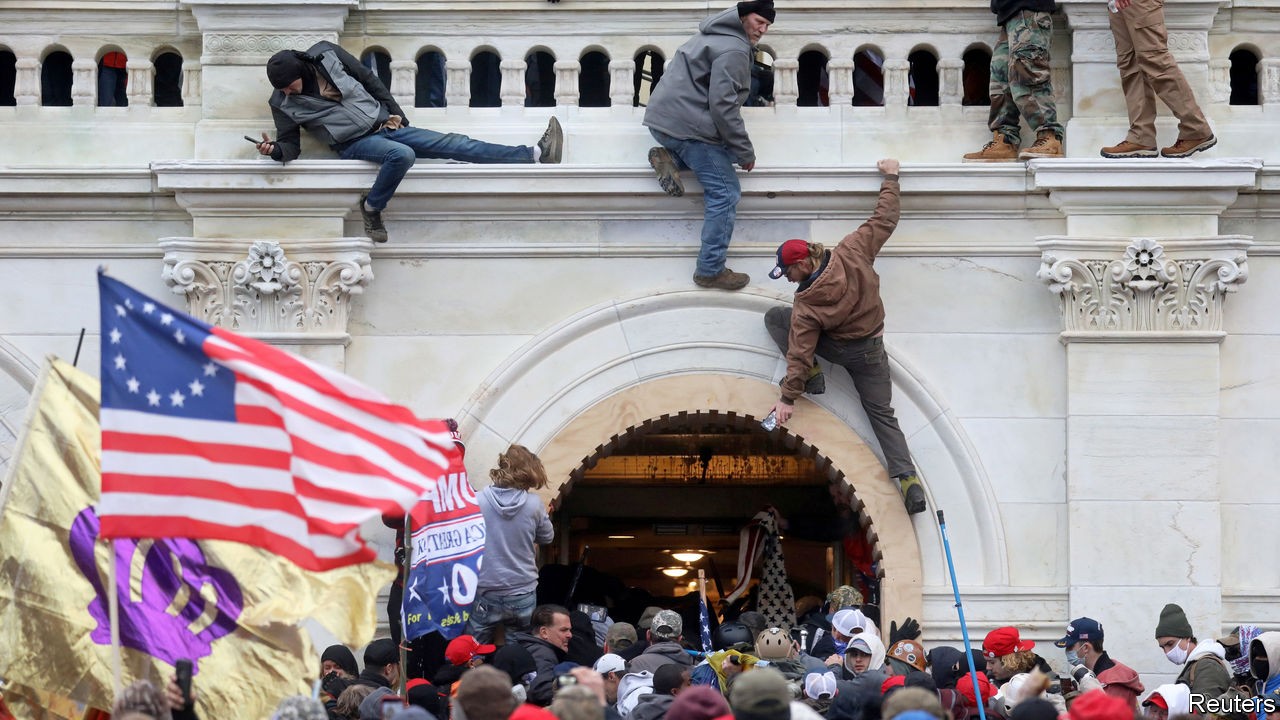 How does an American impeachment trial work?

The Senate sets its own rules. Milk is involved
LAST YEAR Donald Trump became the first American president to run for re-election after being impeached. On December 18th 2019 the House of Representatives voted along almost entirely partisan lines to impeach Mr Trump for abuse of power and obstruction of Congress.

On January 13th-one week after his supporters stormed the Capitol to prevent Congress from certifying his defeat, resulting in the deaths of five people, including a Capitol Police officer-he became the first president to be impeached twice.

Every House Democrat, along with ten Republicans, voted to impeach Mr Trump for “inciting violence against the government of the United States”, making it the most bipartisan presidential impeachment vote in American history. Mr Trump’s trial in the Senate begins on February 9th. How does the Senate conduct such a trial?

The fourth section of Article Two of the constitution says that a president can be impeached for “Treason, Bribery and other high Crimes and Misdemeanors”-a standard so vague that Gerald Ford, a former president, cynically but accurately noted that “an impeachable offence is whatever a majority of the House of Representatives considers it to be at a given moment in history.”

Grounds for impeachment may be vaguely and politically defined, but the first two articles of the Constitution lay out the basic procedure: the House has the sole power to impeach; the Senate conducts the trial; conviction requires the votes of two-thirds of the senators; punishment is limited to removal from office and a bar on standing again; and when a president stands trial (any federal officer, not just presidents, can be impeached; most of the 20 impeachment trials have been of judges), the Chief Justice of the Supreme Court must preside.

But the mechanics of the trial are entirely up to the Senate. That is why, for instance, its starting date was subject to negotiation between Charles Schumer and Mitch McConnell, respectively the Senate’s current and former majority leaders. According to rules proposed in 1974 and adopted in 1986, senators are sworn in as jurors, but they can also call witnesses, under subpoena if necessary, and question them by submitting written queries to the presiding officer.

As in a standard trial, the House managers presenting the case for impeachment and the lawyers defending the impeached person make opening and closing statements, with the House managers speaking first in the former case and last in the latter. In this trial, they plan to rely heavily on video presentations rather than witness testimony.

Debates on procedural matters cannot exceed two hours in total (in contrast to the chamber’s customary practice of limitless debate), and that time must be evenly divided between the two sides.

The trial is, of course, public, but the Senate can retreat into a closed deliberative session on proposal by one senator and seconding by another, during which each senator may speak for ten minutes each on most questions, and 15 on “the final question”-whether the impeached person is guilty or innocent. For obscure reasons, senators may drink only water or sparkling water, provided by the Senate cloakroom, or milk, which they must provide themselves.

In Mr Trump’s trial, however, one senator will combine his role as juror with a more prominent role. Rather than the chief justice, Patrick Leahy of Vermont, the president pro tempore of the Senate (the longest-serving member of the majority party), will preside, as is customary for non-presidential impeachments. That no doubt will delight Chief Justice John Roberts, an institutionalist who is wary of the Court being drawn into politics, and reportedly did not want to preside over another impeachment trial.

That is not the only unusual thing about the trial. It will be the first of a president who has left office. Mr Trump’s attorneys argue, in a brief filed to the Senate on February 2nd, that his no longer holding office renders the impeachment process illegitimate. History suggests a different view-the Senate tried William Belknap, a former secretary of war, after he left office. But the presidents' lawyers will probably still lean heavily on this question.

Late last month, 45 of the 50 Republican senators backed a motion from Rand Paul of Kentucky asserting the unconstitutionality of the proceeding. That will no doubt frustrate Democrats, some of whom have mooted another measure arguing that the 14th amendment-which bars any federal elected official who engaged in “insurrection or rebellion” against the government from holding office-bars Mr Trump from running for president again.

But Mr Trump and his supporters would almost certainly challenge such a measure in court. It also carries political risks, not least letting Mr Trump cast himself as a silenced martyr, rather than what the record shows he is-a defeated one-term president.
#Donald Trump
Add Comment