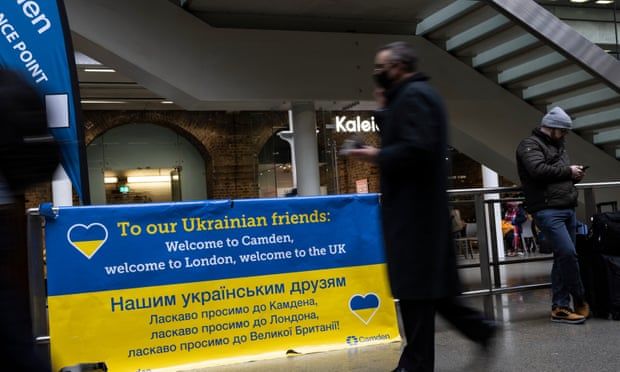 A whistleblower working on Britain’s Homes for Ukraine scheme has revealed that he and his colleagues “don’t know what we’re doing”, and claims the scheme has been “designed to fail” in order to limit numbers entering the UK.

Amid criticism over the numbers of Ukrainians so far allowed to come to the UK, the insider revealed that confusion, poor morale and lack of guidance meant staff contracted to the scheme frequently resorted to “making up” their response to cases.

Staff working on the helpline for the scheme – introduced after widespread fury over the UK government’s initial response to the Ukrainian refugee crisis – revealed that they received only three hours of training with no follow-up help, and said any complaint or suggestion to improve the system was met with silence.

“We don’t really know what we’re doing,” said the source, who works for the private company responsible for processing the documentation of Ukrainian refugees. “The system is designed, it would appear, for people to fail. They want to keep the numbers down. Everything they do feels as if it is to do that. I’ve even had a barrister and lawyers on the phone saying they couldn’t understand the system.”

The whistleblower questioned the official government data on Ukrainian refugees, claiming the statistics gave the impression that ministers were being more generous than they were in reality.

The source, speaking on condition of anonymity, said he had dealt with numerous cases where UK visas had been issued for an entire Ukrainian family apart from one child, which in effect stopped the family travelling to the UK.

“This allows the government to say we’ve issued lots of visas. Yet, because they have withheld one, it’s a guarantee those Ukrainians won’t travel,” said the source.

The whistleblower said he came across four or five cases each day in which a single child from a family had not received permission to travel, a pattern he believed was “too much of a coincidence” for it not to have been encouraged.

A government source said that family applications were “normally processed together” but cases differed in complexity, and that safeguarding processes were in place to protect children from trafficking.

Latest government figures show that 40,000 UK visas have been issued under the Homes for Ukraine scheme since it was launched five weeks ago – yet just 6,600 Ukrainians have actually arrived.

One sponsor who offered a place in her home for a mother and daughter from Borodyanka – a small town north of Kyiv that was devastated during the Russian invasion – told the Observer the child had still not received their visa after a month.

Katerina Lisenkova, who is also a volunteer helping Ukrainians come to the UK, said they had applied for a visa for the pair on 21 March and, although the mother received one “quickly”, the daughter had not and both had been stranded in Poland.

Hours after the Observer raised the case with the government last Friday, the daughter received permission to travel to the UK. On Saturday, British sponsors described being at their “wits’ end” after a Ukrainian mother who was due to stay in their home received a visa but her children, including a four-year-old daughter, were left waiting. 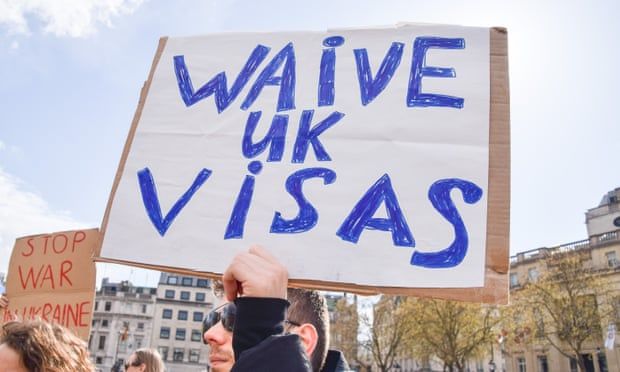 A protester in Trafalgar Square this month. The government has been criticised over the number of Ukrainians it has so far allowed into the UK.

Lisenkova said she was aware of 700 applications under the Homes for Ukraine scheme that had still not received a response, many dating from when the scheme was launched.

The whistleblower is employed by a Paris-based multinational called Teleperformance, which also owns consular services company TLScontact. The latter has been criticised for promoting paid services to Ukrainians applying for visas.

The source, who has been working on the scheme’s hotline for a month, said: “So far I have had two phone calls from Ukrainian women in tears who say their experiences have left them feeling that they won’t be welcomed by the UK government and therefore they don’t want to come here any more. That’s tough when you hear that.”

He claimed that calls from potential sponsors and applicants to the Homes for Ukraine scheme rarely appeared to be recorded.

“I’ve taken one call since I’ve been here out of hundreds, possibly thousands, in which it said ‘recording’ before the person came through, the source said. “I used to work on the Covid 119 lines, where everything was recorded.

“The Covid line was far more structured: there was a very fixed set of rules, with lots of information for us. On the Ukrainian line, we have no information.”

However, he said Teleperformance was not entirely to blame for the problems relating to the Ukrainian scheme, because the firm was essentially working to the specifications of the UK government.

“Teleperformance is the client. It is just fulfilling whatever it is that’s asked of them.”

But he said any complaints to the firm’s management appeared to be ignored: “We get zero response and if there is an attempt to tweak it or make it better, we are certainly not told about it. Communication is nonexistent.”

The resultant sentiment among staff, the source said, was frustration.

“Colleagues I’ve spoken to feel the same way. We are all feeling pretty exasperated,” he added.

The scheme’s helpline aims to guide applicants through the sponsor process and help them with inputting the data required for a successful outcome. However, the government has the final say who gets a visa and is allowed to enter the UK.

A government spokesperson said that, when combined with its Ukraine Family Scheme, a total of 71,800 visas had been granted, with 21,600 Ukrainians arriving in the UK.

They added: “We are processing thousands of visas a day – this shows that the changes we made to streamline the service are working and we will continue to build on this success so we can speed up the process even further.”