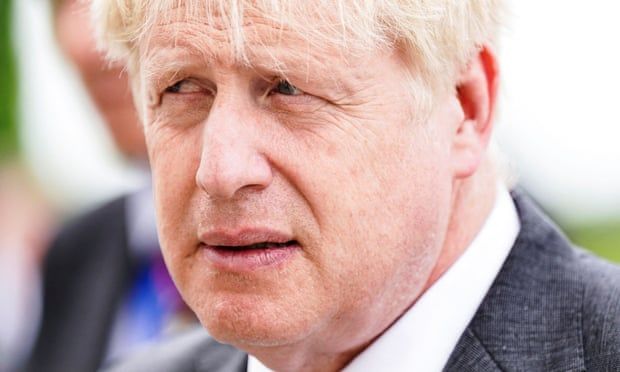 The final straw for Boris Johnson’s ethics adviser came this week when he was asked about a proposal to deliberately break the ministerial code by contravening trade laws, but Christopher Geidt’s resignation letter raised a litany of other issues.

As a civil servant known for his veiled and even-tempered language, this is what Geidt wrote when he resigned on Wednesday – and what it revealed about key events during his tenure.

Initial concerns about Johnson’s treatment of the ministerial code

"I appeared before the public administration and constitutional affairs committee in parliament yesterday … I was asked at length about my recent annual report. I alluded to my frustration, as made clear in my preface, that you had not made any public reference to your own conduct under the ministerial code in the period since inquiries were under way. This would be especially important in the event that the Metropolitan police found against you, which they did, and/or that Sue Gray’s report included criticism of behaviour within the scope of the ministerial code, which it did.

Senior government figures had breathed a sigh of relief on Tuesday when Geidt emerged from his appearance in front of a select committee, seemingly on side and appearing to have put thoughts of resignation behind him. He was, however, quizzed about the preface to his annual report, which was made public in May, and in which he said there was a “legitimate question” about whether the prime minister broke the ministerial code and that he should explain his actions.

"I reported to the select committee yesterday that I was satisfied that you had responded to my annual report to explain your position. I am disappointed, however, that the account you gave was not fuller, as noted above. Moreover, I regret the reference to ‘miscommunication’ between our offices, with the implication that I was somehow responsible for you not being fully aware of my concerns. These inconsistencies and deficiencies notwithstanding, I believed that it was possible to continue credibly as independent adviser, albeit by a very small margin.

When Johnson was fined by police for attending a birthday gathering that broke strict lockdown laws, Geidt says he expected Johnson to publish on the record an explanation as to why he believed he had not broken the ministerial code. Given the code bears Johnson’s signature and stresses the importance of honesty, integrity and leadership, Geidt pushed for the prime minister to set out how his actions aligned with those principles – but only received a short reply last month. In it, Johnson blamed a “failure of communication between our offices” for having taken so long to issue a statement. Geidt clearly felt this was not a problem for which his office and No 10 should have shared equal blame. Though his position had been tested to its limits, and trust in Johnson was reaching its lowest point, Geidt says he felt able to continue in the role he had held for just more than a year.

"I was tasked to offer a view about the government’s intention to consider measures which risk a deliberate and purposeful breach of the ministerial code. This request has placed me in an impossible and odious position … The idea that a prime minister might to any degree be in the business of deliberately breaching his own code is an affront. A deliberate breach, or even an intention to do so, would be to suspend the provisions of the code to suit a political end. This would make a mockery not only of respect for the code but licence the suspension of its provisions in governing the conduct of Her Majesty’s ministers.

In a move few expected, Geidt said it was another attempt by Johnson to deliberately breach the ministerial code that pushed him over the edge. Though he made no mention of what the issue was directly, Geidt revealed that the prime minister told him he was considering doing something that would have subverted the whole point of having a ministerial code. Geidt clearly felt he was no longer having to defend Johnson’s reputation, but his own. And fearing his own reputation was destined to end up in tatters, resigned.

How Boris Johnson tried to defend himself

Having been caught completely off guard, the prime minister was forced to issue a frantic reply, which said:

"You say that you were put in an impossible position regarding my seeking your advice on potential future decisions related to the Trade Remedies Authority. My intention was to seek your advice on the national interest in protecting a crucial industry, which is protected in other European countries and would suffer material harm if we do not continue to apply such tariffs. This has in the past had cross-party support. It would be in line with our domestic law but might be seen to conflict with our obligations under the WTO [World Trade Organization]. In seeking your advice before any decision was taken, I was looking to ensure that we acted properly with due regard to the ministerial code.

With so much mystery hanging over what the proposed breach of the ministerial code was, Johnson was compelled to clarify – and explained that he had wanted to extend steel tariffs but realised this might contravene WTO rules. Johnson was seeking to present the move as simply an idea – not one necessarily taken forward. But for Geidt, Johnson even considering deliberately breaking the ministerial code was enough.