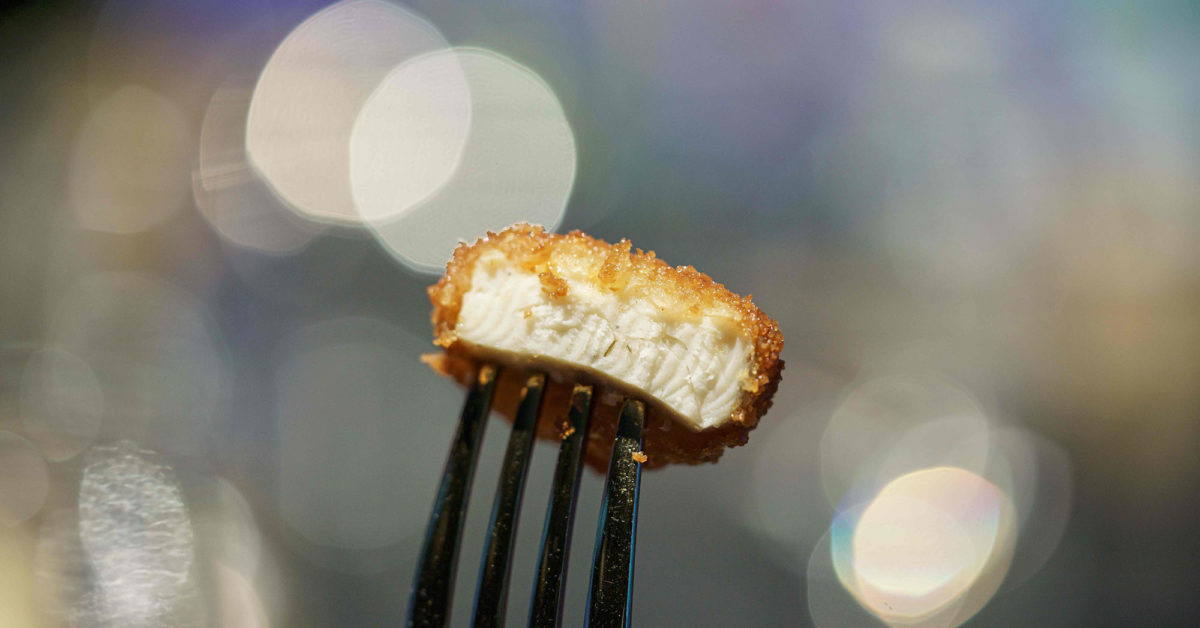 Her father, Dutch scientist Willem van Eelen, pioneered and patented the technology which Eat Just had hoped to launch in the Netherlands. However, the Dutch Food Safety Authority (NVWA) shut down their request to hold tastings in 2018, saying it hadn't received EU approval.

Eat Just's experience reflects what industry insiders describe as a continent too reluctant and too slow to embrace a technology that could slash agricultural emissions and shore up food security — two of the EU's declared priorities.

Lab-grown meat — aka no-kill or cultured meat — is produced using muscular stem cells extracted from an animal and then grown in a large steel "bioreactor.” The cells are later moved to a watery gel where they bulk up into sinewy tissue.

The entire process can take place in a restaurant-sized space and doesn't require land-intensive livestock raising or the slaughter of methane-belching animals. The Singapore launch indicates the technology can be commercially viable, after long being dismissed as too expensive. The four-course chicken nugget dinner at the 1880 restaurant costs $23 and prices are expected to fall further.

But while Asia, the United States and even Israeli Prime Minister Benjamin Netanyahu are jumping on the slaughter-free meat bandwagon, European policymakers have shown less appetite for the technology.

“Is this really the society we want for our children?” tweeted France’s Agriculture Minister Julien Denormandie in reaction to Eat Just's Singapore debut. “Me, NO. I say it clearly,” Denormandie continued. “Meat comes from life, not from laboratories. Count on me that in France, meat will stay natural and never artificial!”

Companies like Eat Just, which is based in San Francisco, say such skepticism means Europe risks losing out on a sector that analysts predict could make up over a third of the global meat market by 2040.

“We have so much very good technology in Europe that we could be up there with anybody, but if they don’t gear up in a different way then we will lose out and lose out big time," Van Eelen warned.

Part of the issue is Europe's regulatory process. Lab-grown meat will need to be approved by the European Food Safety Authority (EFSA) under the EU's novel foods legislation. The bloc streamlined those laws in 2018, but it can still take three years or more until applications are approved and green-lighted by EU country representatives in the so-called PAFF committee.

Van Eelen said she wept when the Dutch NVWA shut down Eat Just's bid to hold a tasting in 2018, sealing up samples of cultured duck chorizo at three restaurants because the product did not have EU approval.

"I started crying very silently in my car … I had to stop by the side of the road," she recalled.

“It was super sad that my government didn’t understand what we were offering,” Van Eelen added. “For me personally, it was very painful, as I felt that I brought my country a huge present that they didn’t want to open.”

The NVWA referred requests for comment on the issue to their statement at the time which attributed the move to the EU's novel food legislation. Van Eelen disputes this, saying sales to restaurants were made before the legislation took effect.

“The reality is that they hadn’t established a regulatory framework for cultured meat at the time,” said Josh Tetrick, Eat Just's CEO and founder. “I wish that hadn’t been true, but it was — and as a result there was no launch.”

Wolfgang Gelbmann, a senior scientific officer on EFSA’s nutrition unit, said the process of growing meat in a lab carries potential risks. Cells used in bioreactors could become contaminated, for example, and there's a chance of “dysregulation” of cells that have been multiplied many times.

“You need to replace all the nutrients that a cell normally gets through the bloodstream, the intercellular and micro and macronutrients," Gelbmann noted. "These cells need to be added to the medium and there’s no immune system in this bioreactor, so we’d ask … how are these reactors kept from microbial contamination?”

Still, he added, the technology's challenges are not insurmountable and it is “definitely possible” to make safe in-vitro meat.

For the moment, however, the lengthy regulatory delays are prompting more European companies to look beyond EU borders as they seek to move to market quickly. No company has yet applied for EU novel food approval for their lab-grown meat products.

Mosa Meat, for example, is based in the Dutch city of Maastricht and hopes to bring its first cell-grown meat products to market in 2022, according to COO Peter Verstrate. However, he said there is “no doubt” its first offerings will be sold outside Europe because of the long approval procedure.

“We won’t shy away from applying elsewhere if that brings us to the market faster,” Verstrate said. “That’s not a threat, just a fact of life.”

Benjamina Bollag, the founder and CEO of U.K. startup Higher Steaks, agreed that Europe was lagging behind. A few months of extra wait-time for regulatory reasons would not affect her plans, she said, but “if it’s triple the time, then it doesn’t make sense” to launch in Europe.

Tetrick said Eat Just's next big launch is likely to be in the U.S., hopefully in 2021. “It does seem like the U.S. regulators are a bit further along than the EU regulators on this,” he said, noting that the U.S. Department of Agriculture is already gathering information about cell-based meat for its labeling rules.

Potential pushback from Europe's traditional meat sector is another issue.

The livestock industry has sought to protect descriptors for what constitutes "meat," most recently supporting a failed bid in the European Parliament to prevent plant-based products from using terms like "veggie burger." (A similar law was successfully passed in France earlier this year.) Farm lobby groups argue that like vegan products, lab-grown meats could mislead consumers about what they're really eating.

“Let's call a spade a spade,” reads a letter signed by Europe’s six biggest animal meat lobby groups, ahead of the October Parliament vote. It argued that Europe’s "[meat] imitation industry has taken advantage of a European loophole to hijack these powerful common denominations in its favour.”

One of the parliamentary amendments ultimately rejected in October had sought to reserve use of the word meat “exclusively for edible parts of the animals.” It indicated that meat descriptors might not apply for any process that could "alter the internal muscle fibre structure of the meat," which could have posed another hurdle for the cultured meat industry.

“If the more political side of the application process starts to hinder us then I could definitely see [our] operations moving outside of Europe,” said Verstrate from Mosa Meat.

Oh ya 12 days ago
Does this not make you gag? Next they will be throwing in a few old dead people to save the world from having funerals. Scientists gone mad
View all comments (1)Add comment