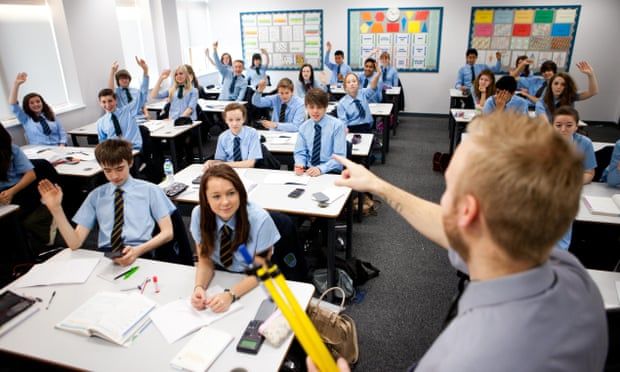 DfE calls for boost to starting teachers’ salaries in England

Unions ask review body to recommend all teaching staff receive same government-funded increase
The government has called for teachers’ starting salaries in England to rise by more than 16% over the next two years but wants below-inflation increases for more experienced teachers.

In its submission to the school teacher review body (STRB), the independent panel that makes recommendations on pay, the Department for Education (DfE) said it wants the statutory minimum for new teachers to rise by 8.9% in September and by a further 7.1% the following year.

The increases would take the starting salary for qualified teachers from £25,714 to £30,000 in September 2023 – fulfilling a promise made in the 2019 Conservative election manifesto although a year later than promised.

The boost for new teachers would be followed by tapering rises for those with more experience, with the upper end of the early career pay scale increasing by just 2% in 2023-24.

More senior teachers and school leaders would see pay increases of just 3% in 2022-23, and 2% in 2023-24. Last month the Bank of England’s monetary policy committee forecast inflation to hit about 6% later this year and remain above 5% until well into 2023.

The DfE said the pay rises would come from existing school budgets. Although schools have wide discretion over pay, in practice most state schools in England follow the guidance issued by the STRB and government.

The DfE’s submission said it wanted the STRB to back “substantially higher” increases to help recruit and retain young teachers. But it argued that increased pay across the board would eat into school funding, calculating that a 1% pay rise for all teachers translated into £250m less in spending available to schools.

“Investment in teacher pay beyond that which is proposed will therefore limit headteachers’ ability to strike the right balance of investment for their schools, resulting in reduced investment in other priority areas that are also vital in driving the best outcomes for pupils and staff,” the DfE told the STRB.

However, the DfE forecast that the pay rises would only improve retention rates by 0.25%, with just 1,000 more teachers staying in the profession.

The four main teaching unions submitted a joint appeal to the STRB, stating: “Increases to starting pay must be accompanied by equivalent increases for all teachers and school leaders. The increases must be enough to start to restore the pay losses against inflation since 2010.”

The NASUWT said it wanted a 12% pay increase across the board. Patrick Roach, its general secretary, said some teachers were having to use food banks or other forms of charitable assistance, cutting back on essential household items or taking a second job.

“We believe that the current challenges facing the profession are so significant that the government must look more broadly at remuneration, and implement structural reform of the teachers pay framework in order to ensure it is fit for purpose,” Roach said.

Kevin Courtney, joint general secretary of the National Education Union, said: “We will call on the STRB to recommend that all teachers and school leaders get the same increases proposed for new teachers, and that the government should fully fund it.”

Meanwhile university staff are to continue their industrial action over pay, pensions and working conditions, after the University and College Union announced five more days of strikes later this month.

Staff at 68 universities have just finished 10 days of strikes but employers have failed to make concessions, especially on changes to pensions that the union says will cause cuts of 35% in retirement income for typical members.