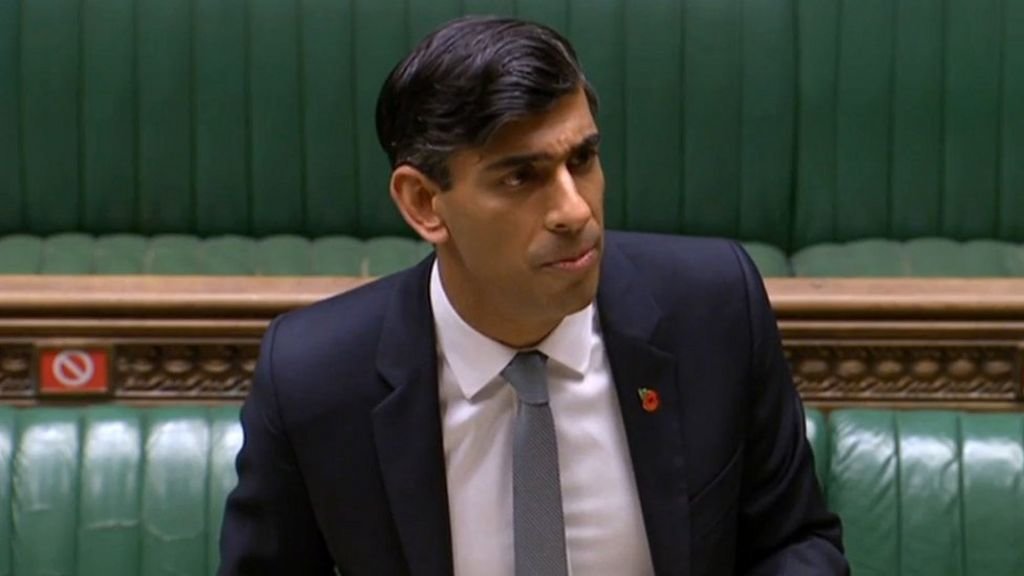 The furlough scheme will be extended across the UK until the end of March, Chancellor Rishi Sunak has confirmed.

Mr Sunak said the scheme will pay up to 80% of a person's wage up to £2,500 a month. He told the Commons that the government will review the policy in January.

The chancellor said his intention was "to give businesses security through the winter".

"The security we are providing will protect millions of jobs," he added.

The furlough scheme subsidises the wages of people who cannot do their jobs, either because their workplace is closed or because there is no longer enough work for them. 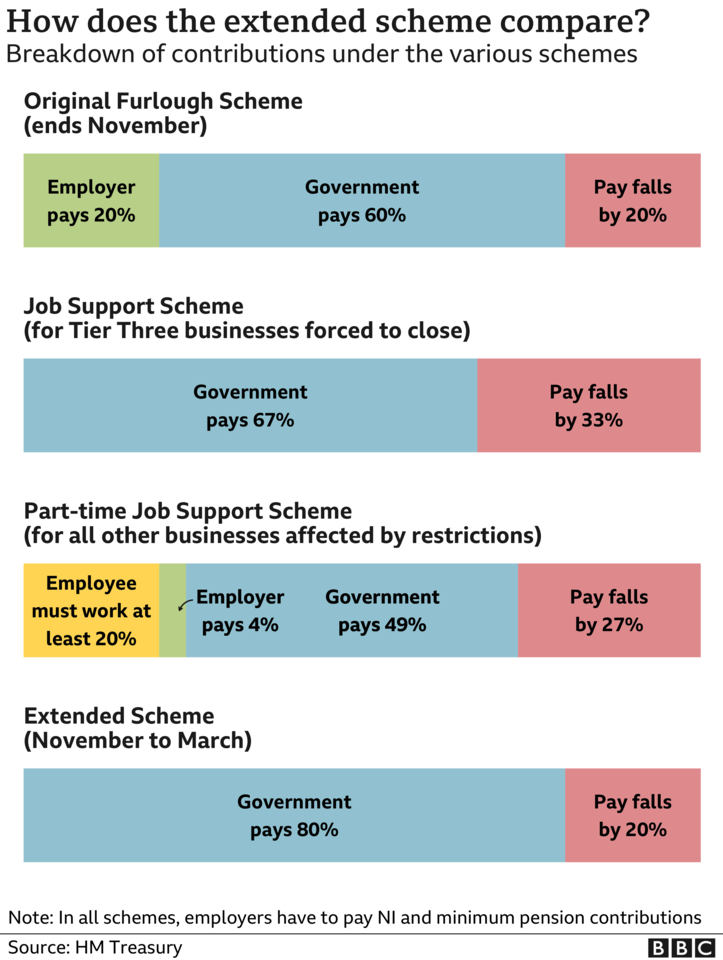 Mr Sunak said it would apply throughout the UK, saying the country had "a Treasury for the whole of the United Kingdom".

As part of the revised scheme, anyone made redundant after 23 September can be rehired and put back on furlough.

What other measures did the chancellor announce?

Mr Sunak also announced billions of pounds of other support for the economy, including more money for self-employed people.

Support through the Self-Employment Income Support Scheme (SEISS) will be increased, with the third grant covering November to January calculated at 80% of average trading profits, up to a maximum of £7,500.

At the same time, the chancellor raised guaranteed funding for the UK's devolved administrations by £2bn to £16bn.

But, many people will remain ineligible for help, including the newly self-employed, those whose pay themselves in dividends, freelancers, and sole traders who previously had a trading profit of more than £50,000.

What does it feel like to be on furlough? 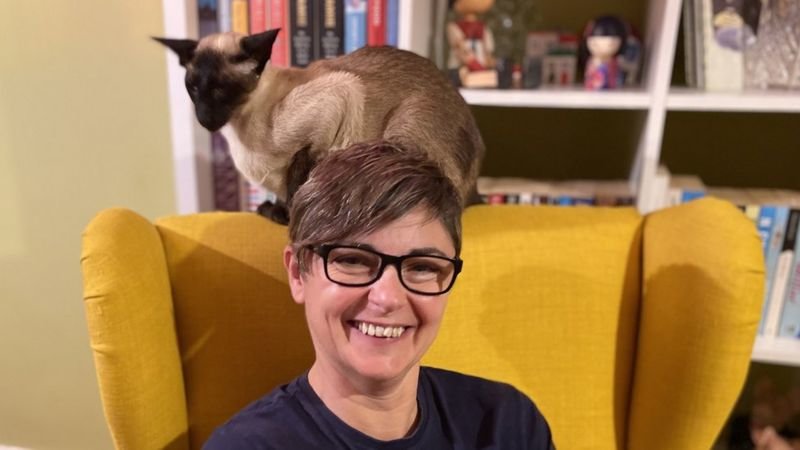 Chef Louise Solomon, 49, is going back on furlough from midnight and says she feels "a huge sense of relief".

She says without the support, she and her wife, a key worker, would only have lasted a few months before things got tight.

"I have card loans, and companies want to be paid regardless. I'd probably have to sell my car and look at what else I could get rid of."

Instead, the furlough extension has given her some breathing space. "It gives you that security - you can sleep at night, knowing money is coming in."

What was the political reaction?

She pointed out that he had previously "ridiculed" a furlough extension as "a blunt instrument".

But Mr Sunak defended his rapid change of policy, saying: "It is not a weakness to be fast-moving in a crisis, but rather a strength."

Alison Thewliss, the Scottish National Party's Treasury spokesperson at Westminster, described the "long-overdue Tory U-turn" as "welcome", but said it came after six months of sustained pressure from the SNP and devolved governments.

Northern Ireland Finance Minister Conor Murphy welcomed the new support, but said it was "regrettable" that repeated calls to extend the furlough scheme "had not been answered sooner".

What does it mean for the government?

This is a change of heart from ministers - and a really significant one. The chancellor and the prime minister did not want to be here.

The furlough scheme was due to end at the start of November. At the weekend, we found out it would last until 2 December. Now it's staying until the end of March.

The government will argue it is necessary because of a changing health picture. They are clearly worried about the economic outlook.

But political opponents have been calling for this for some time and they believe the chancellor has waited too long.

The Treasury has said anyone who was made redundant after 23 September - when the furlough replacement was announced - can be brought back on to the scheme.

But the government will face accusations it should have done this sooner.

What's the background to the decision?

The latest announcement follows several days of wrangling over the scope and duration of the furlough scheme. It was due to end on 31 October, but was then extended to cover the new four-week lockdown in England.

That announcement at the weekend sparked a row with Scotland and Wales, which argued that it was unfair for the full support package to be available only when England is in lockdown.

They said the scheme should be on offer if they went into their own full national lockdowns later on. 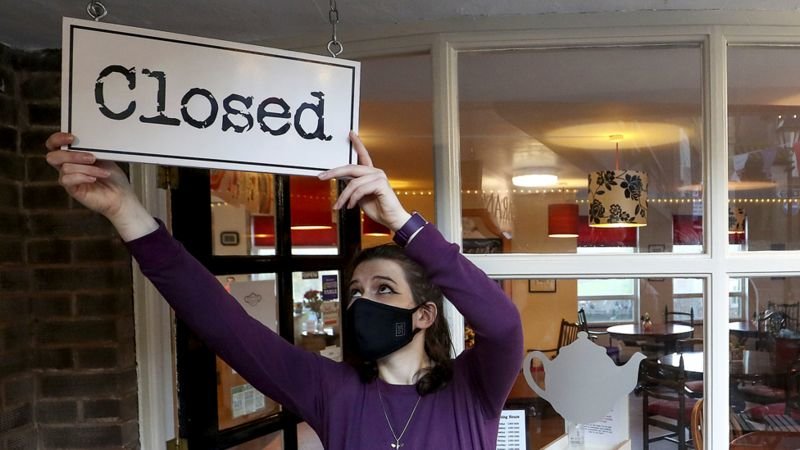 England entered a second lockdown on Thursday until 2 December

The Treasury has not put a cost on extending the furlough initiative until March, as it will depend on the take-up of the scheme,

However, it suggests a rule of thumb of £1bn a month, per million who use it. So three million furloughed workers would cost £3bn a month.

The furlough scheme has cost more than £50bn so far.

What are other people saying?

Paul Johnson, director of the Institute for Fiscal Studies think tank, said the support did not go far enough, particularly for the self-employed, and suggested it had been "dreamt up on the hoof".

Basically return to March schemes (dreamt up on the hoof in 24 hrs) as if nothing learnt since.

Wasteful & badly targeted for self-employed. No effort at targeting sectors/viable jobs for employees. Big contrast to position just days ago.

However, Howard Archer, chief economic adviser to the EY Item Club, said extending the furlough scheme and the self-employment grant to the end of March provided "important support to the UK economy at a time of heightened uncertainty".

Heathrow airport chief executive John Holland-Kaye said: "Whilst we welcome the extension of the furlough scheme, we are clear that it doesn't go far enough for an aviation sector that has been on its knees since March."

He said the sector was being ignored by the government, adding: "The hundreds of thousands of families across the UK that rely on jobs in aviation to pay the bills have no other choice than to feel very alone."

Mr Sunak's statement comes after the Bank of England said it was pumping an extra £150bn into the economy.

The Bank warned the resurgence of Covid-19 would lead to a slower, bumpier recovery.

Just as the last furlough scheme extended long beyond the date that some businesses were allowed to reopen, so we should not infer that furlough till March means lockdown in England till March.

The current measures for England will be lifted on 2 December, but are likely to be replaced by a form of the regional tier system in place until now.

One of the interesting things to watch in the coming weeks will be the effect of lockdown measures on the infection rates.

The hard-hit hospitality industry, in particular, has argued vehemently that the evidence that pubs, bars and restaurants are a major spreader of infection is very thin.

Does shutting hospitality make a huge difference to the spread of infection? The industry says we are about to find out.

How successful has the furlough scheme been?

The furlough scheme was introduced in March and was originally intended to end in May, but Mr Sunak said at the outset that it would be extended "if necessary".

About 9.6 million people have benefited at one time or another, with a steep take-up in the first few months.

However, some have questioned whether all the money has been wisely spent.

HM Revenue and Customs, which administers the furlough scheme, has suggested that up to 10% of the money delivered by the scheme to mid-August - some £3.5bn - may have been paid out in fraud or error.

It is also unclear whether it has genuinely safeguarded viable jobs or merely delayed the inevitable disappearance of unviable ones.

Chancellor Rishi Sunak has extended the furlough scheme to March