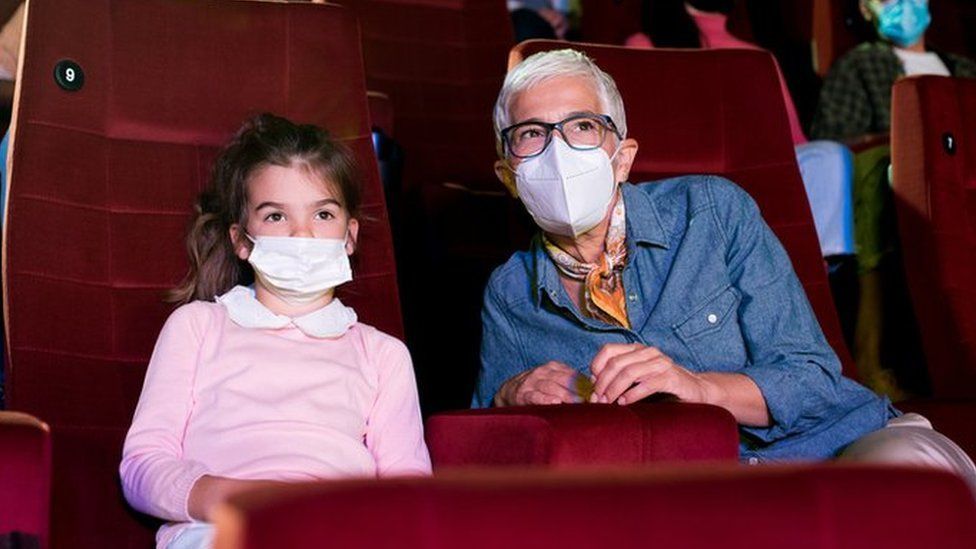 Scotland's vaccine passport system will not be extended to more venues, Nicola Sturgeon has announced.

The first minister had been considering expanding the scheme to cover cinemas, theatres and other hospitality venues.

But she told MSPs that it would not be proportionate to do so, with case numbers having fallen slightly.

People will be allowed to present a negative test rather than proof of two jabs to enter venues that are already covered by the scheme from 6 December.

These include nightclubs and large events such as some football matches and concerts, and would bring Scotland's system into line with others in countries like Wales.

Ms Sturgeon said taking a lateral flow test before socialising with others over the festive period was a "vitally important" step in minimising the spread of the virus.

A decision on adding more venues to the scheme had been expected for several weeks, with Ms Sturgeon previously telling MSPs that it could help "get through what will be a challenging winter without having to reintroduce restrictions on trade".

The government published an evidence paper which suggested Scotland faced a choice between either extending the vaccine passport system or closing down venues and limiting the number of people who can meet up.

However, ministers ultimately decided to do neither after studying the latest data at a meeting of Ms Sturgeon's cabinet on Tuesday morning.

The first minister said that while Scotland was still in a precarious position, with "significant and sustained" pressure on the NHS, the data was actually "more positive than we might have expected it to be". 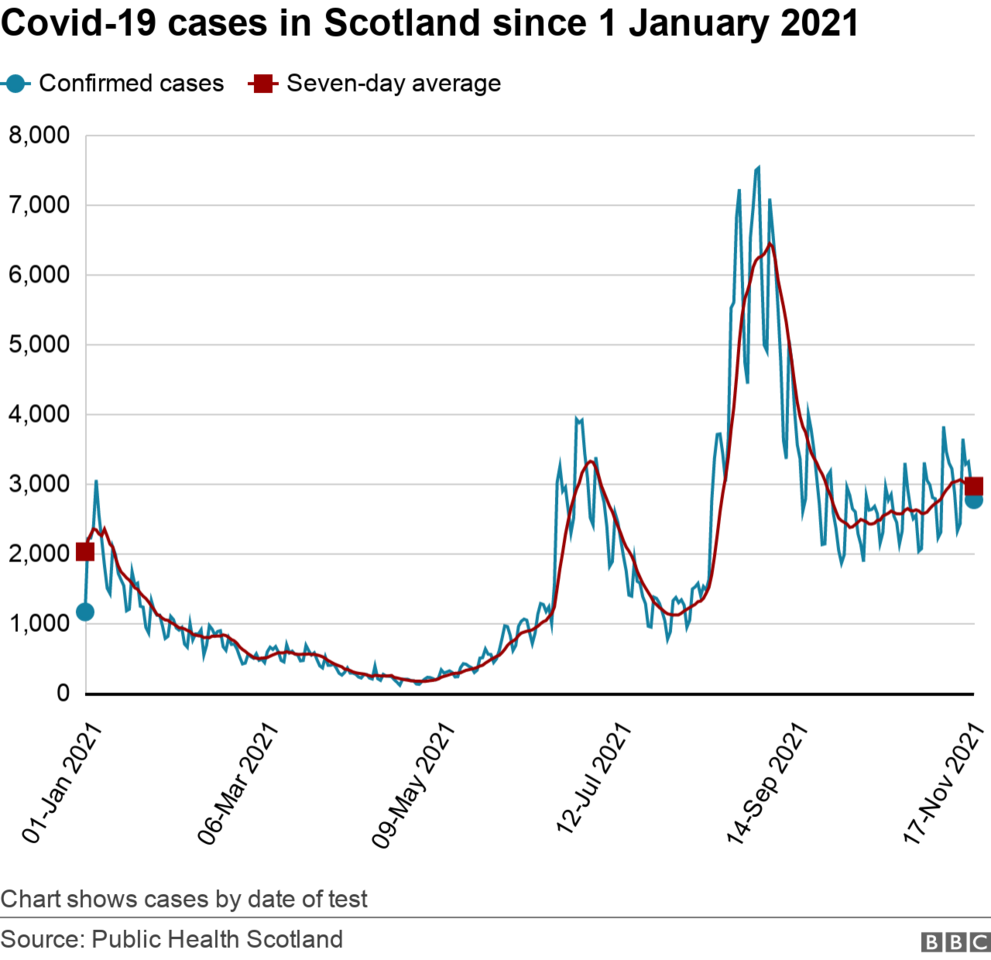 Ms Sturgeon said the spread of the virus had stabilised - with the average number of new cases recorded each day falling by about 3% over the past week.

She said that given the "inevitable impact vaccine certification has on the operation of businesses", ministers had concluded that extending the scheme would therefore not be proportionate.

However, venues which remain covered by the scheme will be allowed to accept a negative lateral flow test instead of proof of vaccination from 6 December - as already happens in many other countries that have introduced vaccine passports.

Ms Sturgeon said this had originally been left out of the scheme to help drive up vaccination rates, but that high uptake rates meant testing could now be included as an alternative. 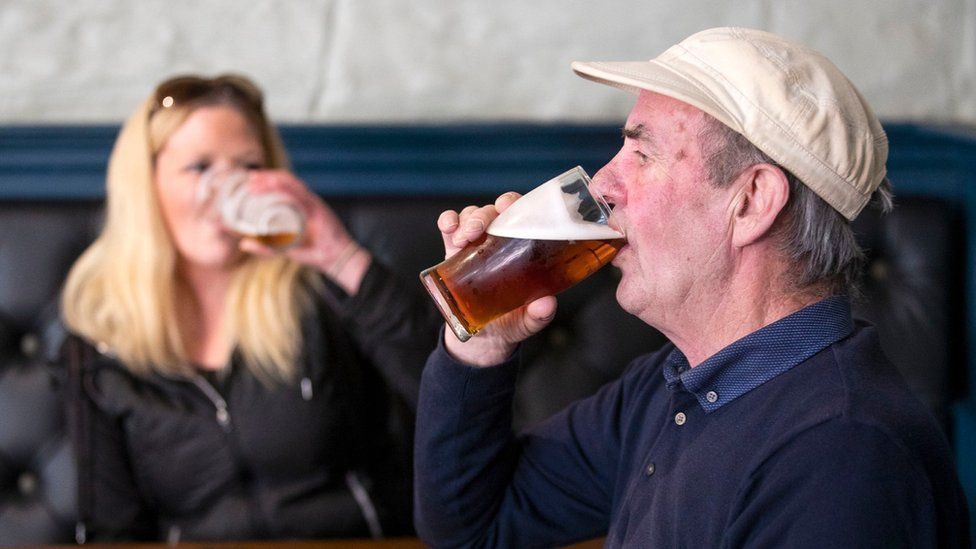 The first minister also urged people to get vaccinated before socialising over the festive period, saying: "You could well be saving your own life, and the lives of your loved ones.

"You will be helping the NHS, and you will be maximising our chances of getting through this winter without the need for further restrictions."

Hospitality bosses had warned that pubs and restaurants could face an "avalanche of cancellations" if the certification scheme had been extended over the normally busy Christmas period.

Business group CBI Scotland welcomed the decision not to do so, with director Tracy Black saying it "strikes the right balance between managing the virus and protecting our economy recovery".

She said: "Many firms would have faced practical challenges and increased costs to implement measures at a time when bumper trading is needed to claw back lost or diminished revenues."

The Federation of Small Businesses described the decision as a "relief", saying firms "will now have a weight off their shoulders".

And the Scottish Retail Consortium said businesses would be "delighted to see a reprieve from further restrictions", praising ministers for listening to representations from industry.

Nicola Sturgeon tends to signal well in advance what changes to Covid rules might be coming. Over the last two weeks, she and her deputy have made clear that extending the use of vaccine certification to further venues was a serious prospect.

A Scottish government evidence paper went as far as to suggest that in order to suppress Covid more, ministers faced a choice between wider use of certification and lockdown-style measures.

But today's statement from the first minister has stopped short of taking either option at this stage, taking account of pushback from business and relatively stable case numbers.

Instead, they are counting on continued use of existing measures like vaccination and mask wearing and an appeal for greater use of home testing to stop the NHS being overwhelmed.

Accepting lateral flow tests as well as proof of vaccination for entry to venues that already require certification aligns the Scottish scheme more closely with Wales and Northern Ireland.

Opposition parties - who have questioned whether vaccine passports are effective - said the move amounted to a government u-turn after weeks of speculation about the scheme being expanded.

Scottish Conservative health spokesman Sandesh Gulhane said ministers seemed to be "making it up as they go along".

He said: "The uncertainty that this government has left hanging over businesses for the last two weeks has been unnecessary and unacceptable."

And Scottish Labour leader Anas Sarwar said the government had been "determined to be seen to be doing something, rather than doing the right thing".

He added: "We have spent months pursuing the incorrect priority. The government's own evidence shows there is no real evidence of an increase in uptake of the vaccine, and transmission has not fallen.

"I welcome the change to include a negative test from now on but frankly we are in this position because the government couldn't accept it was wrong and move in the right direction."

Ms Sturgeon said Mr Sarwar was "fundamentally wrong", saying allowing the use of tests in the system earlier would have "undermined the central primary objective of the scheme", of driving up the vaccination rate.