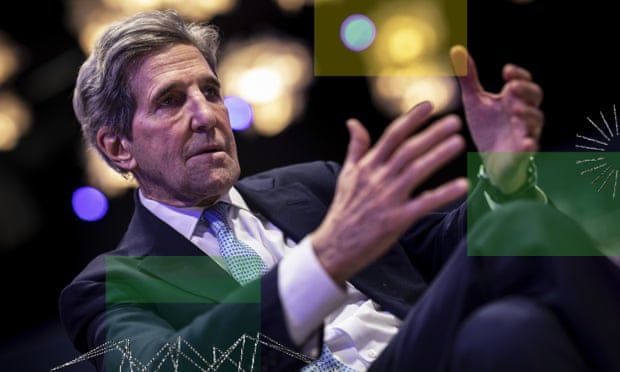 The world is poised to make a big leap forward at the UN Cop26 climate summit, with world leaders “sharpening their pencils” to make fresh commitments that could put the goals of the 2015 Paris agreement within reach, John Kerry has said.

Kerry, special envoy for climate to Joe Biden, gave an upbeat assessment of the prospects for Cop26, which begins in Glasgow at the end of this month, saying he anticipated “surprising announcements” from key countries.

“The measure of success at Glasgow is we will have the largest, most significant increase in ambition [on cutting emissions] by more countries than everyone ever imagined possible. A much larger group of people are stepping up,” he said in an interview with the Guardian. “I know certain countries are working hard right now on what they can achieve.”

Kerry cautioned that there was “still a lot of distance to travel in the next four weeks” and that the progress he anticipated was not yet “signed, sealed and delivered”. That view echoes private soundings the Guardian has taken from the UK hosts, the UN and other key figures.

But he said Cop26 could set the scene for further progress to follow swiftly. “There is not a wall that comes down after Glasgow,” said Kerry. “It is the starting line for the rest of the decade.”

But Kerry, one of the pivotal figures at the talks, also acknowledged the outcome would fall short of a fully fledged deal meeting the aims of the Paris accord, which binds nations to hold global heating to “well below” 2C, with an aspirational limit of 1.5C. 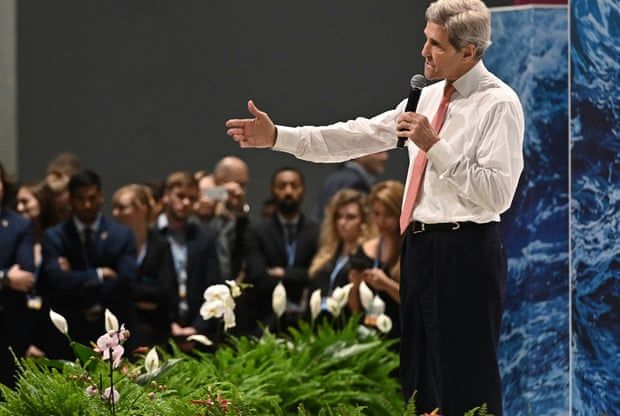 “Will it be that every country has signed on and locked in? The answer is no, that will not happen,” he said. “But it is possible to reach that if [Cop26 creates] enough momentum.”

He said: “Glasgow has to show strong commitment to keeping 1.5C in reach, but that does not mean every country will get there. We acknowledge that there will be a gap [between the emissions cuts countries offer and those needed for a 1.5C limit]. The question is, will we have created a critical mass? We are close to that. If we have some more countries stepping up in the next weeks, we have something to build on.”

Under the 2015 Paris agreement, 197 parties – every government bar a few failed states – agreed to hold global temperature rises to “well below” 2C above pre-industrial levels, while “pursuing efforts” to stay within 1.5C. But the commitments governments made on cutting emissions at Paris, called nationally determined contributions (NDCs), were too weak, and would lead to more than 3C of heating, so countries also agreed to return every five years to ratchet up their ambitions.

Those commitments should be made at the two-week Glasgow summit, which begins on 31 October, having been postponed for a year because of Covid-19, to be attended by more than 120 world leaders. In the six years since Paris, scientists have presented a clearer warning of the dangers of allowing temperatures to rise beyond the tougher 1.5C limit, so the declared aim of the UK hosts is to “keep 1.5C alive” by gathering enough NDCs, climate finance and pledges to phase out coal and preserve forests, to make that possible.

Staying within the 1.5C threshold would require carbon emissions to fall by 45% this decade, but apart from a brief plunge owing to Covid-19 lockdowns, emissions are still rising and are forecast to show their second-strongest leap on record this year. Despite new NDCs from the US, the UK, the EU and others, in total the commitments so far would lead to a 16% rise in emissions.

China, the world’s biggest emitter, will be key to any hopes of a strong outcome at Cop26, but has yet to submit a new NDC. The president, Xi Jinping, who has not left China since the start of the pandemic, has not said whether he will come to Glasgow.

Kerry said Cop26 could still be a success if Xi did not attend. “I am hopeful that President Xi is very much engaged and is personally making decisions, and personally committed,” he said, pointing to a long phone call between Xi and Biden recently in which the climate was discussed. “There was a very clear commitment to work with the US to achieve our goals. We are very hopeful.”

Another positive sign, he said, was that rich nations were close to fulfilling a longstanding pledge that developing countries would receive $100bn (£73bn) a year in financial assistance to help them cut emissions and cope with the effects of extreme weather, which has so far been missed. Biden recently vowed to double the US pledge of climate finance to $11bn a year by 2024, and other countries have stepped up their efforts, leading the climate economist Nicholas Stern to predict that the $100bn target would be met next year.

“We need to get $100bn locked in, whether that is this year or next year. I believe we are going to be there with the money President Biden offered,” Kerry said.

He said countries must also agree to reform fossil fuel subsidies, which amount to hundreds of billions a year. “If you want a definition of insanity, it’s subsidising the very problem you are trying to solve,” he said.

Kerry, a longstanding US senator who challenged George W Bush for the presidency and served as US secretary of state under Barack Obama when the Paris agreement was signed, is embarking on a final hectic round of diplomacy in the next few weeks, with meetings planned with Russia, China, Mexico and Saudi Arabia. World leaders will also meet for the G20 summit in the days before they arrive in Glasgow.

In those meetings, Kerry will point to the commitments Biden has made domestically, including phasing out fossil fuels from electricity generation and reducing emissions from cars. “The US is heading to a post-2035 future where our power sector will be carbon-free. That is not a small step. I hope that can encourage other countries too, with regard to what they might be trying to achieve.”

He will also emphasise the technological advances that could help countries to move faster. “There is a massive amount of money and energy going to bringing these [clean technologies] up to scale,” he said.

Kerry was also confident the US’s post-pandemic infrastructure bill, which Biden hopes to be the engine of a “green recovery”, but which may be scaled back from the $3.5tn envisaged amid opposition and delays, would be passed.

Asked if he was worried about there being any upsets at the Cop26 conference, Kerry said: “I’m not succumbing to any fear at this point. Keep going, straight ahead.”

Alok Sharma, the UK cabinet minister and president-designate of Cop26, travelled to the French capital on Tuesday to call for world leaders to reprise the spirit of the Paris agreement, and come forward urgently with fresh commitments. He said: “Cop26 is not a photo op or a talking shop. It must be the forum where we put the world on track to deliver on climate. And that is down to leaders ... Responsibility rests with each and every country, and we must all play our part. Because on climate, the world will succeed or fail as one.”