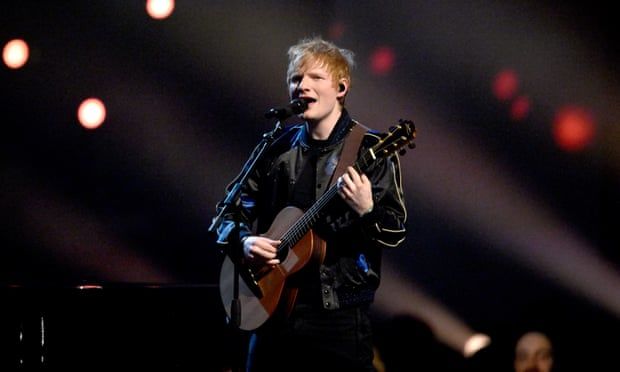 Coincidence or theft? Rise of music streaming can make it hard to judge

Analysis: plagiarism row between Ed Sheeran and Sami Chokri is latest in surge of lawsuits against musicians
They may only be two words, but they are worth tens of millions of pounds. The ascending one-bar phrase “Oh I” from Ed Sheeran’s Shape of You became the focus of a plagiarism row that threw into question the very art of songwriting itself.

Over the course of an 11-day trial, Sheeran and his co-writers, John McDaid and Steve McCutcheon, faced accusations that they had ripped off the 2015 song Oh Why by the grime singer Sami Chokri and songwriter Ross O’Donoghue.

Central to Sheeran’s defence was his argument that the segment in question was “a basic minor pentatonic pattern”, which is “entirely commonplace”. The superstar even took the stand to hum musical scales from Blackstreet’s No Diggity and Nina Simone’s classic Feeling Good to demonstrate how common the melody of Shape of You was.

The argument convinced Justice Zacaroli, who ruled that Sheeran had “neither deliberately or subconsciously” ripped off Chokri’s song. But the case showed how difficult it is to differentiate between coincidence, inspiration and theft, especially when our music consumption has changed with the evolution of streaming.

In an age of YouTube and Spotify, how do we know if one artist heard another artist’s song, especially if they are relatively unknown, or if they both had the same idea?

“The judgment is an emphatic vindication of the creative genius of Ed, Johnny and Steve,” said Sheeran’s lawyers on Wednesday. “As they have always maintained, they created Shape of You together, without copying from anyone else.”

But the debate over copyright infringement in pop continues to rage, as a surge of lawsuits against some of the world’s biggest pop stars are brought to court.

The most significant, experts agree, was the 2018 lawsuit in which Robin Thicke and Pharrell Williams were found guilty of copying “the feel” of Marvin Gaye’s song Got to Give It Up and ordered to pay $5m (£3.8m) to Gaye’s family and future royalties.

“The kind of borrowing that was at the heart of the Blurred Lines case has generally not been found to be a copyright violation in the past,” said Dr Tim Hughes, a senior lecturer in music at the University of West London.

“Blurred Lines is an example of what might be called a pastiche: a song consciously written in the style of another. Musical history is full of examples of that practice (although generally not so blatant). But the publicity and the damages awarded in that case were so extreme that it has clearly helped encourage further lawsuits.”

Other recent litigations include two against Dua Lipa over her song Levitating, one against Katy Perry over her song Dark Horse, and one against Taylor Swift over her 2014 hit Shake It Off by two songwriters who claim she lifted their phrases.

Sheeran himself settled a $20m plagiarism lawsuit for his song Photograph in 2017, after he was accused of copying former X Factor winner Matt Cardle’s Amazing.

Olivia Rodrigo added two members of Paramore to the writing credits of her hit single Good 4 U, after fans noted similarities to Paramore’s Misery Business. She’s also been accused of copying the riff from Elvis Costello’s Pump It Up in her song Brutal.

But as Costello noted when he came to her defence, this is part and parcel of the process of making music. “It’s how rock & roll works,” he said. “You take the broken pieces of another thrill and make a brand new toy. That’s what I did.”

According to Joe Bennett, a forensic musicologist at Berklee College Of Music in the US, “opportunistic plaintiffs” are exploiting a common musical error that listeners can make, which is to assume that plagiarism is the only explanation for one melody being slightly similar to another.

“There are 60,000 songs uploaded to Spotify every day, with more than 82m recordings in the catalogue,” Bennett said.

“Right now, we’re in an era of mainstream pop where a lot of songs are based on two- and four-bar chord loops … So once in a while a short coincidental similarity occurs, and the plaintiffs are so struck by the similarity that they believe the only explanation must be plagiarism. They are often mistaken.”
Add Comment