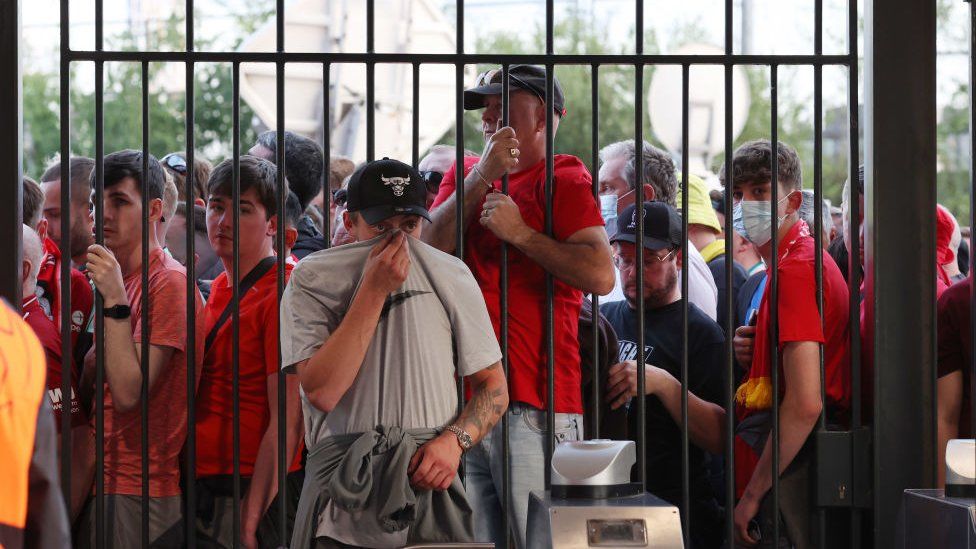 France has hit out at what it says was "industrial-scale" ticket fraud at Saturday's Champions League final amid a row over the game's policing.

Ministers acknowledged difficulties in managing crowds at the final in Paris, but say organised fraud was the root cause of the problems.

The treatment of fans was "an absolute disgrace," one Liverpool fan said.

Tom Whitehurst said he had to get his disabled son "out of the way" after they were pepper-sprayed.

"[Fans] were indiscriminately pepper-sprayed and there were people with tickets, who arrived two-and-a-half hours early, who were queuing up and they were charged at by riot police with shields."

Another supporter, Michael Carter, told the BBC people further back in the queue "were lifting each other up and over the walls because they were being crushed".

The BBC's sports journalist Nick Parrott, who was in Paris, said "it was the most petrifying experience I've ever had at a football match". He tweeted that locals were "trying to force their way in leading to security closing the gates and keeping out legitimate fans with tickets".

Amid a chorus of criticism from the UK, the French sports ministry has been meeting Europe's football governing body Uefa, the French Football Association and stadium officials and police to "draw lessons" from the event.

Uefa has now commissioned an independent report into the events surrounding the match. The French sports ministry also commissioned its own summary report, due within 10 days.

France's interior and sports ministers have been pointing blame for the chaos at fans with fake tickets and local youths trying to force their way into the stadium.

Interior minister Gérald Darmanin said "massive, industrial-scale" ticket fraud had caused Liverpool fans to turn up en masse, and said that of about 30 arrests made at the Stade de France "more than half concerned British citizens". He stated that there had been 30,000 to 40,000 Liverpool fans with fake tickets or without tickets outside the stadium.

"We regret a disorganisation in the admission of British supporters," he said.

Speaking earlier on French radio, sports minister Amélie Oudéa-Castéra said there were "no problems" regarding Real supporters and the Spanish side had controlled their travelling fans better than Liverpool.

But a spokesperson for France's independent police commissioner's union (SICP), Mathieu Valet, told the BBC's Newshour that "supporters without tickets or with fake tickets... were not the main problem."

"It's clear that we needed more police - we didn't have enough on the ground," he added.

So the French government recognises that the policing was at times heavy-handed, and that the difficulties getting fans from the train station should have been predicted after a strike.

But it insists that there would have been none of the chaos without the presence of "30-40,000" ticketless Liverpool supporters.

All of this will have to be verified.

If it is true that seven out of ten tickets checked at the first perimeter turned out to be fraudulent, then that does indeed suggest a scam of monumental proportions - enough to render useless even the best-laid policing plans.

But plenty of people - French as well as British - who were there on Saturday night question the government's version. They wonder if blaming Liverpool isn't a convenient way of shucking off responsibility closer to home.

And if there were 30-40,000 ticketless people milling around the stadium as the match got under way, how come that is not what journalists remember seeing? That number of disappointed and aimless fans don't just disappear.

Liverpool fans are angry with the French, and with UEFA for blaming them for the disastrous evening. The chaos will probably turn out to have multiple causes.

But from the French point of view, pointing the finger at convenient foreign scapegoats would be particularly short-sighted.

A spokesman for UK Prime Minister Boris Johnson described footage from the Stade de France at the weekend as "deeply upsetting and concerning" and called for a full investigation.

Uefa initially blamed the "late arrival" of fans for the problems.

But Merseyside police, who are responsible for policing in Liverpool and were present in Paris, said the vast majority of Liverpool fans arrived early at the turnstiles and behaved in an "exemplary manner".

Saturday's TV footage showed young men who did not appear to be wearing red Liverpool shirts jumping the stadium gates and then running away from security.

Liverpool fans spoke of long queues building up hours before the match started, and the final was delayed by 35 minutes by the trouble outside the stadium.

The chaos continued after the match ended. One Real Madrid supporter, Antonio Castaño, told the BBC there were "organised groups robbing people, harassing them, breaking car windows, it was absolute chaos. 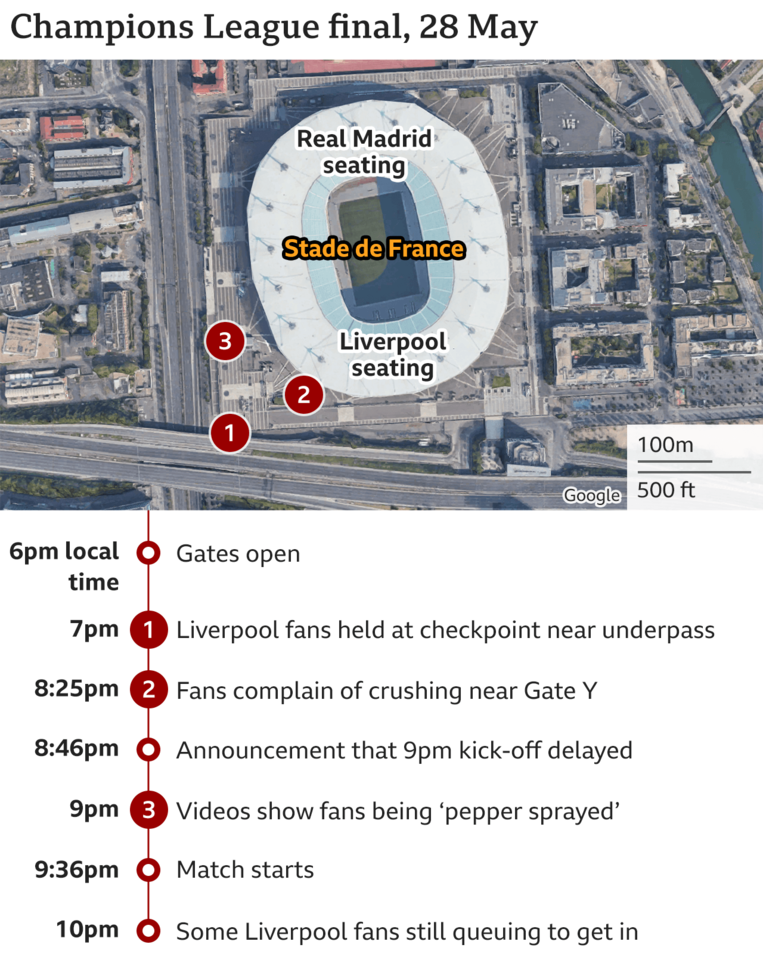