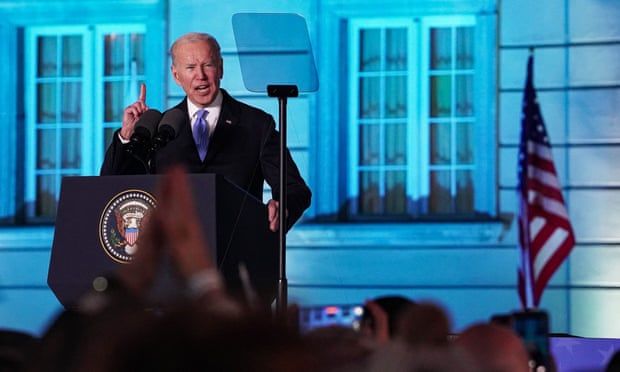 Biden is a diplomatic liability. With his anti-democratic statements he’s playing into Putin’s hands

Zelenskiy is a master of mobilising his nation’s defence. But his plight must not become a plaything of western politics, says Guardian columnist Simon Jenkins

An iron maxim of war is to imagine what your enemy most wants you to do, and not to do it. Vladimir Putin’s invasion of Ukraine is floundering. He has lied to the Russian people to justify it. He has told them it is not Ukraine but Nato and the west that seek their defeat and his overthrow. That is why they must support him in his fight. To a large extent they have done so.

Nato has so far been scrupulous in not playing Putin’s game. It has stood aloof from active military support to Ukraine’s President Zelenskiy, as have its individual member countries.

For all the war-dancing, defence-boosting and cheerleading in western capitals, Nato discipline has held. This is a conflict between Russia and its neighbour, its origins deep in east Europe’s histories and insecurities.

Nothing could therefore be more dangerous than to agree with Putin’s narrative, to accept the revival of cold war antagonism between Russia and the west. Moral and logistical support for Kyiv is one thing, Nato planes in the air and boots on the ground are another. The latter would lead to a reckless and possibly uncontrollable escalation of the confrontation.

Cue America’s president, Joe Biden. Last week he arrived in Europe pumped up on belligerent rhetoric. In January he had suggested a Russian advance into Ukraine would constitute no more than “a minor incursion”. In March, he is telling American troops in Poland that they would soon see brave Ukrainians defying Russia “when you are there”. America would “respond in kind” to a chemical weapon attack on Ukraine, one that has not been threatened. Biden went further, calling Putin a “butcher”, one who “cannot remain in power”. He thus broke a longstanding protocol against the west demanding regime changes abroad (except when instigated by America). These remarks were similar to Biden’s “commitment” last October that America would “protect Taiwan” in the event of an invasion by Beijing, a flat rejection of Washington’s careful and longstanding ambiguity on the subject.

In all these cases, the White House and state department have instantly denied that Biden meant what he said. But the damage was done. Footage of him making the remarks is unnerving. What seemed at first a folksy ad-lib suggested a man not fully the master of his tongue, let alone his brief.

Moscow broadcast Biden’s aggressive intent to the Russian people. France and Britain felt they had to reassert their non-engagement – inevitably dismaying the Ukrainians. Nato’s delicate unity had been undermined. Putin grasped eagerly at the reinforcement of his claim.

The response to Biden’s speech of the veteran American diplomat, Richard Haass, was serious. “The fact that it was so off-script in some ways made it worse,” he said, as it indicated what his true beliefs are. It also suggests a split in the American administration’s view of the conflict, with the president already committed to a wider war. The prospect is thus of the world’s principal power blocs led by two men both with fingers on the nuclear button but with an apparently uncertain hold on reality. It is precisely the “madness” scenario foreseen by alarmist strategists of the 20th-century power struggle.

The Ukraine war is clearly at a turning point; at the end of its beginning and possibly even at the beginning of its end. This is a moment of maximum uncertainty. Fighting on the ground is mostly stalemated. Ukraine’s allies have given almost as much logistical support as they dare, while avoiding risk of direct contact with the Russians. They know that the mere prospect of Nato troops on the battlefield would validate Putin’s narrative. It would risk unleashing an escalation in targets and weaponry. Ukraine would become a bloodbath, while Europe would confront a 1914-style triggering of alliance obligations.

Zelenskiy has so far been masterful in mobilising his nation’s defence. He has shown what military analysts have never understood but has emerged from recent wars: that hi-tech weaponry and air superiority can be no match against simple fighters, even amateurs, with a cause in their hearts and a homeland at stake. Now, however, Zelenskiy must be no less masterful. He must negotiate the compromises that are inevitable if Ukraine’s cities are not to be utterly destroyed and Putin’s armed forces are to agree to withdraw.

Remarks out of Kyiv in advance of this week’s peace talks in Istanbul seem aware of this realpolitik. In essence, Zelenskiy suggests a reversion to the 2015 Minsk 2 settlement. This acknowledged de facto Russia’s aversion – now reinforced – to any Nato advance to its border with Ukraine. It accepted the country’s virtual “Finlandisation”. But Minsk also agreed substantial but unrealised autonomy for the Donbas region, any refusal of which would seem to condemn the war to ongoing hell.

The status of this autonomy will clearly be crucial. The old industrial districts of Donbas have been the source of anarchy within Ukraine in recent years. Such regional dissent has blighted the stability of half the nations of Europe over past decades – currently including Spain, France and the UK. Centralist regimes may decry them and treat separatism as an archaic curse. There is nothing unique about Ukraine, but today it proves the poison of centralism when left to fester.

Finding a constitutional path to autonomy for the Crimean and Donbas regions of Ukraine must hold the key to peace. Somewhere in the murky waters of devolved government, confederalism and “sovereignty-lite” lies a new future for this desperate corner of Europe. Much of Donbas has already been autonomous for eight years since 2014 and some recognition of this must surely be the price of peace. Fixing its border – and guaranteeing its acceptance – will be challenging. The last thing this diplomatic tightrope needs is to find itself a plaything of western domestic politics.

Two Nato leaders, Biden and Britain’s Boris Johnson, are populists unschooled in the art of diplomacy. Both face electoral hostility at home. Both are prancing along Ukraine’s frontier beating their chests in parodies of Churchillian machismo. The bombast is not deterring Putin, but it strengthens his existential narrative and raises the war’s global profile. This must make him less inclined to accept the cost of any concession in defeat.

Another maxim of war is to allow your enemy a bridge over which to retreat. That bridge is one of constitutional compromise in Donbas. It is an acceptance that this is Ukraine’s dispute with Putin, not the west’s with Russia. For the sake of a wider peace it must be kept that way.

Oh ya 188 days ago
Here I will fix the headline for you. Biden’s mind is a bowl of jello. Your welcome
View all comments (1)Add comment