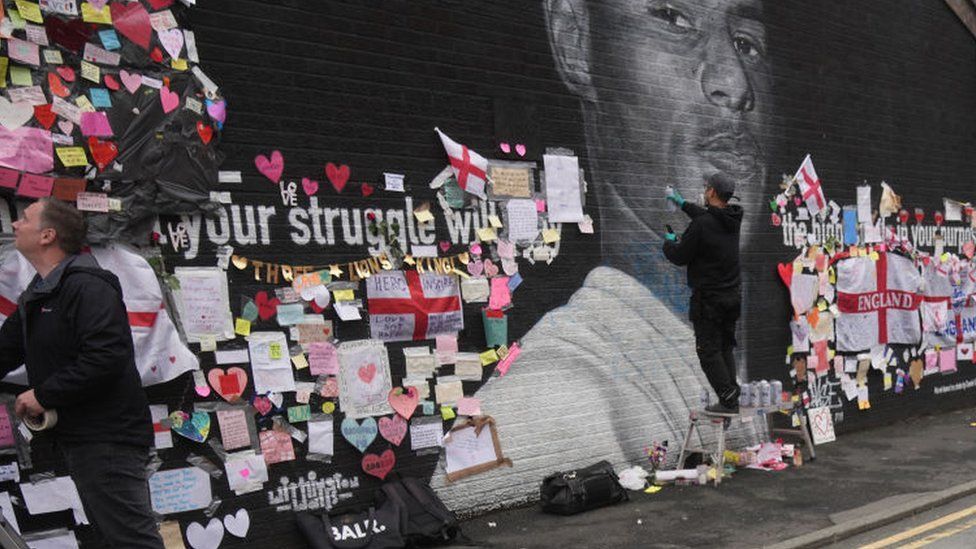 Anyone convicted of racist abuse online should be banned from attending football matches, Labour has suggested.

It wants the courts to be given new powers to crack down on perpetrators, like those who targeted members of the England squad after the Euros final.

Currently, only those who shout racist abuse from the terraces can be forbidden from attending games.

There has been condemnation of the abuse suffered by footballers Marcus Rashford, Bukayo Saka and Jadon Sancho.

The trio were vilified online and a mural of Marcus Rashford was defaced following England's defeat to Italy on Sunday.

It sparked a debate about whether the government and social media companies are doing enough to combat racism in the sport.

Ministers have promised to act through the Online Safety Bill, which is yet to be published.

A draft version, which came out earlier this year, suggests it will place a duty on technology companies to protect UK users from abuse, with large fines imposed if they fail to do this.

She said: "The racists who have been abusing England players online should be banned from football grounds.

"They do not deserve to be anywhere near a game of football."

She said that Labour would ensure that online abuse is treated in the same way as racism directed at players from the terraces.

The prime minister met social media companies, including representatives from Facebook, Instagram, Snapchat and TikTok on Tuesday afternoon, to discuss the issue.

Ahead of the meeting, his spokesman said the companies should "do everything they can to identify these people [the perpetrators of racist abuse]".

And earlier, Mr Johnson told a meeting of his senior ministers that the racism aimed at footballers was "utterly disgraceful and had emerged from the dark spaces of the internet".

Facebook, which owns Instagram, said it had "quickly removed comments" directed at the players, while Twitter said it had used "a combination of machine learning based automation and human review" to remove 1,000 post and block certain accounts.

This sheer volume swamps the armies of human moderators employed by those platforms.

Some describe nightmare shifts sifting through the worst and most graphic content imaginable and then making decisions about what should be done with it.

So, the solution these companies are all pouring countless time and money into is automation.

Algorithms trained to seek out offensive material before it is published, the blanket banning of incendiary (and illegal) hashtags, the use of techniques such as "hashing", which create a kind of digital fingerprint of a video, and then block any content bearing the same marker, are already in regular use.

But so far, automation remains a bit of a blunt instrument.

In a message to Conservative MPs, the former minister Steve Baker, said the backlash over the racist abuse "may be a decisive moment" for the party.

He said "Much as we can't be associated with calls to defund the police, we urgently need to challenge out own attitude to people taking the knee."

The act of taking the knee has become a prominent symbol in sport and during anti-racist protests in recent years, and England players have been adopting the stance at the start of their matches.

His intervention comes after the Home Secretary, Priti Patel, was accused by the footballer, Tyrone Mings, of having inflamed the situation in the run up to the Euros.

Writing on Twitter on Monday evening, Mings said: "You don't get to stoke the fire at the beginning of the tournament by labelling our anti-racism message as 'Gesture Politics' and then pretend to be disgusted when the very thing we're campaigning against, happens."

On Wednesday, shadow home secretary, Nick Thomas-Symonds, will raise the issue in the Commons, asking an urgent question about the prevalence of racist abuse on social media.