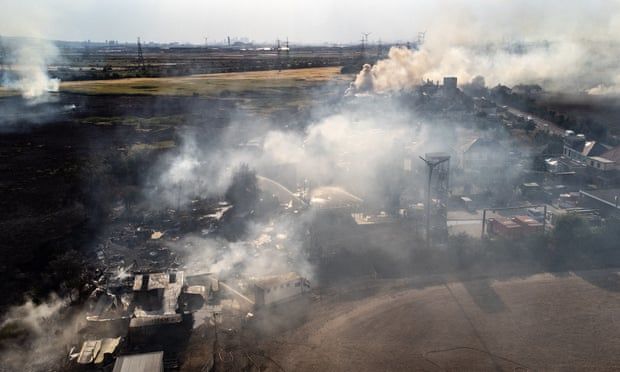 ‘A wake-up call’: as extreme heat hits UK, experts say net zero is the only way out

As UK reaches 40C and fires blaze, scientists warn of such temperatures every three years if emissions are not lowered

Hundreds of firefighters battled blazes across England on Tuesday as temperatures surged to a historic high of 40.3C, capping two days of extreme heat that scientists warn is “a wake up call” for the climate emergency.

The temperature is set to drop by up to 10C in some areas on Wednesday, with heavy showers and thunderstorms predicted in parts of northern England and southern Scotland, with the potential for localised flooding, lightning strikes, transport disruption and power cuts.

On Tuesday evening a band of showers began crossing England, although the Met Office said the air was so dry that very little was reaching the ground. Wednesday’s rain was forecast to be much heavier. The Met Office has declared a yellow warning for thunderstorms for parts of south-east, east and central England in the afternoon and evening.

While it will be fresher for most places, some parts of East Anglia will still see temperatures reach as high as 30C.

On Tuesday, in what climate experts labelled “a grim milestone”, the previous record temperature of 38.7C was first broken at Charlwood in Surrey before noon and then surpassed at Heathrow, which broke the 40C mark at 12.50pm. By 4pm at RAF Coningsby in Lincolnshire, the thermometer showed 40.3C – a full 1.6C higher than the previous 2019 high, which was exceeded at least 34 sites across the country.

Overnight on Monday, a record overnight temperature of 25.9C was reached in Emley Moor, West Yorkshire, easily exceeding the previous daily minimum of 23.9C, recorded in Brighton in 1990.

Fire brigades in London, Leicestershire, Norfolk and South Yorkshire were among those to declare major incidents as flames destroyed buildings and devoured tinder-dry fields in Wennington, east London, grasslands elsewhere in the capital and in Groby, Leicestershire.

Thirty fire crews tackled a grass fire in Upminster, which sent smoke billowing across the M25. In the West Midlands, firefighters tackled a blaze at Lickey Hills country park near Bromsgrove, leaving scorched earth and skeletal trees. A major incident is defined as having “serious consequences” and requires a special response by one or more emergency responder agency.

Households in south-east England were told to save water by switching off washing machines and farmers warned the drought was hitting animal feed supplies.

Experts calculated that close to 1,000 people are likely to die as a result of the current hot spell, stretching from Sunday to Wednesday. Such a toll would be higher than the average of the full-summer heat-related excess mortality recorded from 2000 to 2019, said researchers at the London School of Hygiene & Tropical Medicine.

The Met Office’s chief of science, Prof Stephen Belcher, warned: “If we continue under a high emissions scenario we could see temperatures like these every three years … The only way that we can stabilise the climate is by achieving net zero … soon.”

Hannah Cloke, a professor of hydrology at the University of Reading, said this week’s red warning for extreme heat was “a wake-up call about the climate emergency”. “If record-breaking weather extremes and energy price shocks that affect everyone doesn’t convince our leaders that some serious stepping-up of policy is required, then I don’t know what will,” she said.

As thousands of people in Yorkshire, Lincolnshire and the north-east were left without power after transmission equipment overheated, Dr Sam Fankhauser, professor of climate economics at the University of Oxford said the heat was “a stark reminder of … the urgent need to decrease global carbon emissions”.

Nine of the UK’s 12 hottest days since 1884 have now occurred within the last two decades.

Boris Johnson, who has been accused by Labour of “checking out” of his job, compared the government’s heatwave response to the Covid pandemic, saying it sought “to balance risk with the need to keep our country, our society and our economy moving”.

In his final cabinet meeting on Tuesday, he said: “We should keep schools open and our transport system going as far as we possibly can during these high temperatures, and keep our fantastic NHS providing for the people of this country.”

A No 10 spokesperson said: “With temperatures setting records in this country, the PM said no one could doubt we were right to be the first major economy to go for net zero.” Johnson later tweeted his thanks to “all the firefighters and frontline services who are working incredibly hard to keep us safe on this scorching day”.

As Britain sweltered, Scotland recorded a new 34.8C temperature record (1.9C above the previous 2003 high) and hospitals scaled back the number of planned surgeries and installed cooling units for IT server rooms.

The east of England ambulance service reported emergency calls were up, an A-road became buckled like “a skatepark” and the East Midlands and East Coast mainlines closed because of the heat. Trains out of London Euston were suspended due to a lineside fire, with the blaze igniting when 25,000-volt overhead electric cables came down. Birmingham New Street was also closed to all trains due to damaged overhead power lines.

The transport secretary, Grant Shapps, admitted it would take decades to make infrastructure resilient enough to cope with the heating climate. “There’s a long process of replacing it and upgrading it to withstand temperatures, either very hot or sometimes much colder than we’ve been used to, and these are the impacts of global warming,” he said.

Cooler weather was on its way on Tuesday evening, with a band of showers crossing England, although the Met Office said the air was so dry that very little was reaching the ground. Thunderstorms were forecast in parts of northern England and southern Scotland. Further downpours across some areas of southern, south-east and eastern England are expected on Wednesday, with warnings of potential flooding and lightning.

A 14-year-old boy and a man in his 20s became the fifth and sixth people to die since Saturday after getting into trouble in water. Scotland Yard said the boy was seen going into the Thames at Hampton in south-west London and his body was recovered from the river at Richmond. The man died at Cotswold Water Park. Another swimmer was missing at sea off Clacton pier in Essex and five others were pulled from the water.

The Royal Life Saving Society urged people to swim in supervised areas and the National Fire Chiefs Council added: “Jumping in for a swim can lead to cold water shock and accidental drowning, regardless of swimming ability.”