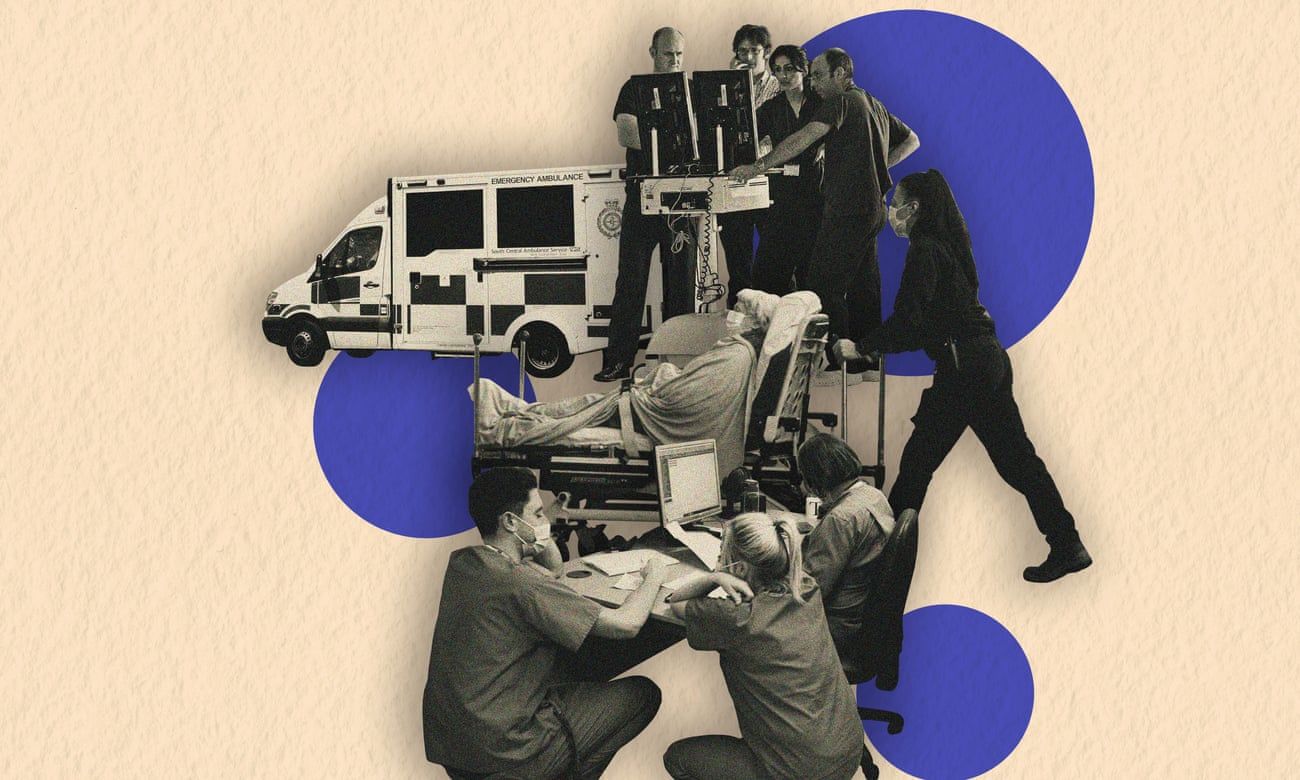 ‘A horrible winter lies ahead’: next PM will inherit an NHS on its knees

In a television studio in Stoke-on-Trent last month, Liz Truss and Rishi Sunak traded blows over everything from credit card economics to Channel migrants to the accessories chain Claire’s. The list of issues the pair clashed over was dizzyingly long.

There was one glaring omission, however. In the hour-long debate there was not a single mention of the NHS – despite being engulfed in its biggest ever crisis. The NHS now shares the same traits as many of those relying upon it to keep them alive and well: it is elderly, has multiple comorbidities, and is in dire need of emergency care. Summer has left it on its knees. Worse is expected this winter.

“The new prime minister will inherit an NHS in its worst state in living memory,” says Matthew Taylor, the chief executive of the NHS Confederation, which represents the healthcare system in England, Wales and Northern Ireland. “There is no escaping that the NHS is in a state of crisis.”

The facts, he says, speak for themselves. “There are 105,000 vacancies. A&Es are overcrowded. Around one in seven hospital beds are occupied by patients who can’t be discharged. Some patients have had to wait over 40 hours for an ambulance. Care is being put at risk by neglected buildings due to underinvestment. And then there’s the waiting lists, which stretch into the millions across elective care, mental health and community care.”

Jeremy Hunt, the chair of the health and social care committee, is equally concerned. “The new PM will inherit an NHS facing the most serious crisis in its history,” he warns. “A&Es, ambulances, general practice and social care are in serious peril across the country.”

The overriding problem for the new Downing Street incumbent is that, while in previous years problems in the NHS centred on specific areas, today the entire house is on fire.

“The NHS has never been as challenged as it is now,” says Alastair McLellan, the editor of Health Service Journal. “There is not one area of NHS provision that isn’t really struggling … There is literally nowhere where it isn’t bad, and in some cases really bad.” 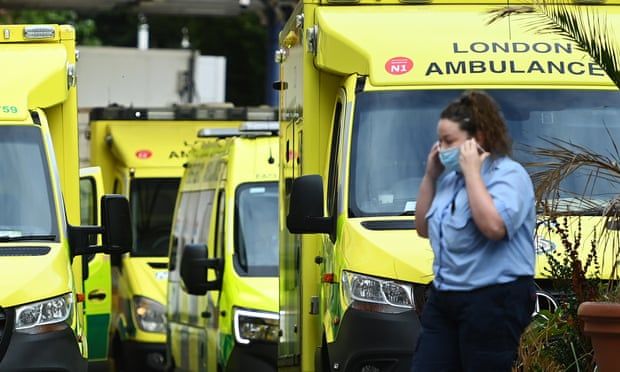 Ambulances outside a hospital in London. A record 29,317 people had to wait over 12 hours in English A&E departments in July.

In the short term, says Robert Ede, the head of health and social care at the Policy Exchange thinktank, the key task will be to prioritise. “Almost every light on the dashboard is flashing. The singular priority for this winter should be to ensure that patients can get access to core services.”

One light that flashed all summer was urgent and emergency care. A record 29,317 people had to wait over 12 hours in English A&E departments in July from a decision to admit to actually being admitted. That was up 33% from 22,034 the previous month and is the highest for any month in records going back to August 2010.

“Patients face extremely long waiting times,” says Dr Adrian Boyle, the vice president of the Royal College of Emergency Medicine, who says many are in a serious condition or have severe injuries. “We know long waiting times for patients can cause harm or worsen conditions or injuries. The huge number of patients waiting for care is alarming.”

Ambulances in England took an average of 59 minutes and seven seconds last month to respond to emergency calls such as strokes, up from 51 minutes and 38 seconds in June – well above the target of 18 minutes. “If you call an ambulance in the south-west … there’s a reasonable chance you will die before it turns up,” says McLellan. “However bad the NHS has got in the past, that has tended not to be the case.”

Richard Murray, the chief executive of the King’s Fund thinktank, concurs. “While the waiting list having crossed the 6.7 million point may seem eye-watering enough, the depth of the challenge in emergency care – seen in ambulance and A&E waiting times – is worse. NHS plans for recovery have been hampered by repeated waves of the Omicron variant and more fundamentally, deep workforce shortages that have been long in the making.”

General practice has been hit particularly badly by the failure to recruit and retain enough staff. “Too many patients say it is difficult to get a GP appointment even though colleagues in primary care are working flat out,” the chief executive of NHS England, Amanda Pritchard, admitted in a memo to staff this month.

“The new prime minister must make general practice a top priority if he or she is serious about ensuring the NHS remains sustainable to deliver care to patients now and in the future,” says Prof Martin Marshall, the chair of the Royal College of GPs. “We are making more consultations every month than before the pandemic and the care we are delivering is becoming more complex, but numbers of fully qualified, full-time GPs are falling.”

Christina Pagel, a professor of operational research at University College London, says Covid-19 “considerably worsened” the NHS crisis but did not cause it. “Essentially, we went into the pandemic with a health service that was already cut to the bone, with serious staff shortages, morale problems and underfunding.” Nigel Edwards, the chief executive of the Nuffield Trust thintank, agrees. “The pandemic has added fuel to the fire but the root of these problems has been decades in the making.”

Dr Subramanian Narayanan, the president of HCSA, the hospital doctors’ union, says the NHS is in a worse position to face a pandemic now than it was in 2020. “Staffing shortages are more severe than at the beginning of the pandemic and there is no evidence that the drivers of this are being addressed.”

The workforce crisis is the main problem. “Warnings on a lack of a plan for healthcare staffing have been there for years,” says Pagel. “Brexit made it much worse, particularly in cities as we lost so many EU staff who chose to go home.”

Pat Cullen, the general secretary of the Royal College of Nursing, which will ballot its members on industrial action next month, says the key to solving the NHS crisis is through “recruitment and retention – and this starts by paying staff fairly”. 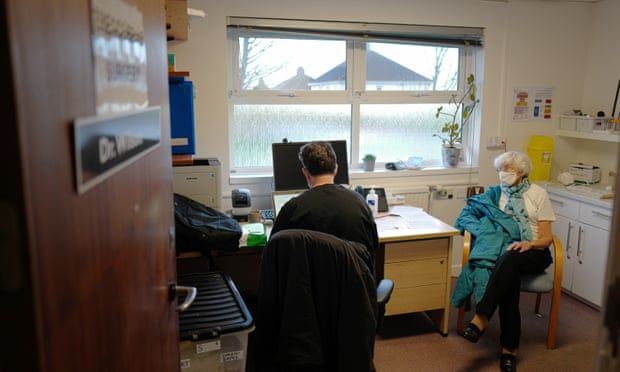 With renewed focus on ambulance delays and the care backlog, other areas of the NHS are slipping. Mental health is an alarming example. “Mental health had, over the past few years, clawed its way up the agenda,” says McLellan. “And the mental health investment standard, although not perfect, did actually see more money spent on mental health. Mental health was getting there … my feeling now is [it’s] actually going backwards.”

Saffron Cordery, the chief executive of NHS Providers, says mental health services have become overstretched. The Royal College of Psychiatrists warns waiting lists are at record levels and care is at “crisis point”. The charity YoungMinds says thousands of young people are attempting suicide as a result of long waits for treatment.

“The NHS has never faced such a deep crisis and there seems to be no political will whatsoever to face up to the reality and get to grips with it,” says Boyle. “It is deeply concerning that neither the prime minister nor the leadership candidates have grasped the severity of this crisis, the scale of patient harm occurring, and how much worse this could get in the winter.”

Since its absence from the Stoke-on-Trent debate, the NHS has barely featured in the leadership race. It only recently did so when Truss said she would divert £13bn of funding earmarked for the NHS to social care.

In theory, it is a good idea, McLellan says, but it should have happened years ago. The problem is now is a “dangerous time to do it”. “Does social care need money more than the NHS? Yes. But we’re now in a situation where they’ve let the NHS get into crisis as well as social care. So both need money.”

Hard decisions must be made, says Edwards. “The new prime minister will need to rapidly face up to and make tough choices to address the interconnected challenges across health and care if they hope to turn around declining performance, falling public satisfaction, and growing access inequalities.”

That means urgent action, stresses Murray. “What can be done? Winter is always by far the toughest time for the NHS, and time is running desperately short to do anything, but whatever can be done, should be.

“This includes getting behind the Covid and flu vaccination campaigns; producing a quick fix to the pensions issue driving senior staff out of the service; and being ready for emergency support to social care that can also help the NHS by getting patients out of hospital quickly when they are ready. Beyond that sustainable recovery can only come from confronting the workforce crisis.”

Hunt says: “A horrible winter lies ahead of us, and a serious, funded NHS workforce plan is the only way to prevent avoidable deaths mounting up in the months ahead.” Ede argues that urgent investment in NHS capital such as new kit and facilities “has the potential to deliver much bigger return: solving problems like delayed diagnosis”.

Meanwhile, the NHS crisis and choices facing the new prime minister come at the worst possible time, says Edwards. “These decisions will be made even more difficult against a backdrop of austerity from the 90s, a lack of vision reminiscent of the 80s and the industrial relations and inflation of the 1970s. There will be no easy route through.”